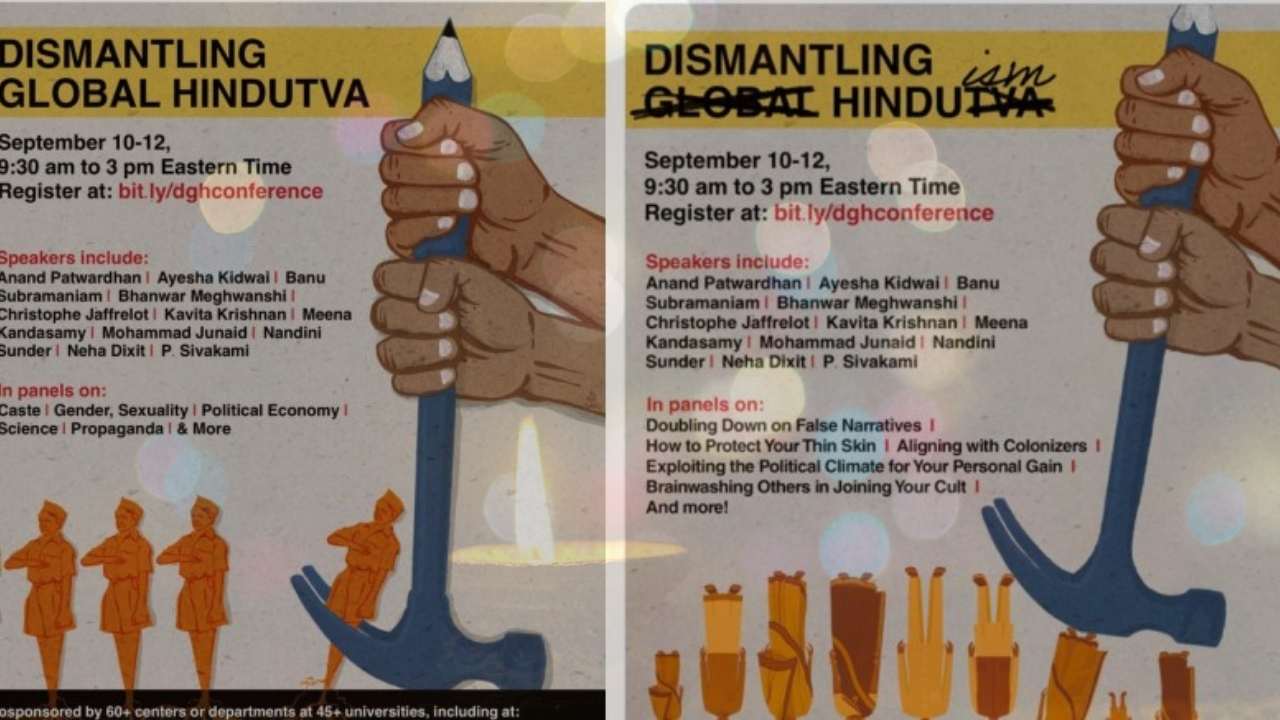 NEWARK, N.J. (Diya TV) — An upcoming virtual conference called “Dismantling Global Hindutva” has triggered an unprecedented mobilization of Hindus across the United States against universities listed as co-sponsors of the event. Fueled by a rapidly growing diaspora and years of resentment towards South Asian studies departments, Indian political polarization is no longer a remote issue for American educators.

Announced on August 14th, the anonymous team of volunteer professors and student academics behind the conference insists the event is about political ideology, not religion. “We welcome students and academics from all over the world, and especially the US where Hindu supremacist groups are trying to use their minority status as cover to prevent any critique of Hindutva both here and in India,” said the team in a statement emailed to Diya TV.

Hindutva (“Hinduness”) is a term popularized by the writer and activist Vinayak “Veer” Savarkar in the 1920s. While referring to a nationalist ideology based on shared affiliation with Hinduism and other Indian religions, Hindutva supporters vary in their religious adherence (Savarkar himself was reportedly an atheist). Prominent organizations associated with Hindutva include the ruling Bharatiya Janata Party, with over 180 million members, and the Hindu fraternal organization the Rashtriya Swayamsevak Sangh (“National Volunteer Organization”).

Critics argue Hindutva is fundamentally an intolerant, regressive ideology that threatens India’s secular and democratic values. Opponents frequently link it to European fascism. “Hindutva is a global form of hate,” says Rutgers University associate professor Audrey Truschke, who tells Diya TV she is not involved in the conference as speaker or organizer.

According to Truschke, “Hindutva ideologues fiercely deny the diversity of Hindu traditions, and wish to deprive the rest of us of knowledge about the depth and breadth of Hinduism throughout history.” The conference organizers similarly emphasize that “Hindutva organizations hold a monolithic idea of Hinduism, seeking to collapse its diversity and simplify its rich histories. It demonizes minorities with a wish to render them into second class citizens.”

However, Nikunj Trivedi, president of the Coalition of Hindus of North America or CoHNA, believes the conference speakers’ past statements contradict claims the conference is only about Hindutva. For example, keynote speaker Meena Kandaswamy wrote a poem describing the Hindu deity Rama as a “dickhead,” while another tweeted that floating corpses of COVID-19 victims embodied “oppressive Brahmanical practices.” “When they say ‘we are against Hindutva, not Hinduism,’ the argument falls apart. I can tell you no Hindu, even Hindus that are not that religious, would agree with their statements,” says Trivedi.

Other speakers are also Indian politicians, such as Kavita Krishnan, member of the Politburo of the Communist Party of India (ML). Another, P Shivakami, previously contested a seat in the Lok Sabha (India’s lower parliament) as a Bahujan Samaj Party candidate. Shivakami also established the Samuga Samathuva Party that gained one seat in the Indian state of Tamil Nadu’s state assembly in 2016.

“Activist professors are showing a brazen disregard for policies their institutions have in place to protect their reputation and 501(3)c status,” says Hindu American Foundation (HAF) Executive Director Suhag Shukla, referring to limits on political campaigning non-profits must follow to maintain tax-exempt status. “Education has been such a critical piece to our community’s success and integration in this country,” says Shukla – explaining the particular intensity of the response, including one million letters sent through HAF’s system alone. Nevertheless, neither CoHNA nor HAF have called for the event’s cancellation. “The idea we are trying to suppress speech is laughable,” says Shukla.

Truschke, however, disagrees. “Hindutva ideologues have devoted significant resources to demonizing scholars and academic work, especially when we highlight the incredible diversity of Hindu traditions. Recently, those who champion Hindutva have resorted to claiming that Western academics and even the academy as a whole are anti-Hindu. This is an incredulous claim.” Truschke and other members of the South Asia Scholar Activist Collective (SASAC) developed a toolkit called the Hindutva Harassment Field Manual in response to frequent online attacks. The toolkit includes contributions by conference speaker Christophe Jaffrelot.

The list of co-sponsors and toolkit (posted on the conference website) have only compounded Hindu groups’ suspicions. “Every community has the right to speak up for equal and fair treatment,” says the student group Hindus on Campus. “Suggesting that we are somehow affiliated with a foreign government and agents of it is laughable – perhaps the professors should take time to reflect why they perpetuate the same xenophobia they supposedly oppose.” The online group of anonymous activists has accused Truschke of intimidating and silencing Hindu students.

Many Hindu groups argue South Asia scholars, journalists, and activists depict Hindus solely as a majoritarian, intolerant, and irrational community in India, or as a caste-privileged and “white-adjacent” minority in the west. In addition, they accuse them of erasing anti-Hindu atrocities and weaponizing their credentials to delegitimize the notion of Hinduphobia entirely. As a result, they fear systemic discrimination against Hindus will become increasingly acceptable through the appearance of elite institutional endorsement.

While CoHNA and HAF have focused efforts on university co-sponsors, their response is far from over. HAF will host a counter conference called “Dismantling Hinduphobia” on August 31st. CoHNA has been hosting multiple events challenging historical narratives common in South Asia scholarship. The DGH conference organizers have removed university logos from promotional materials. However, they are not backing down, tweeting, “We welcome the scrutiny of DGH because we know the legitimacy and urgency of naming the violence of Hindutva. We look forward to seeing you at the conference!”

US weapons in Afghanistan could target India