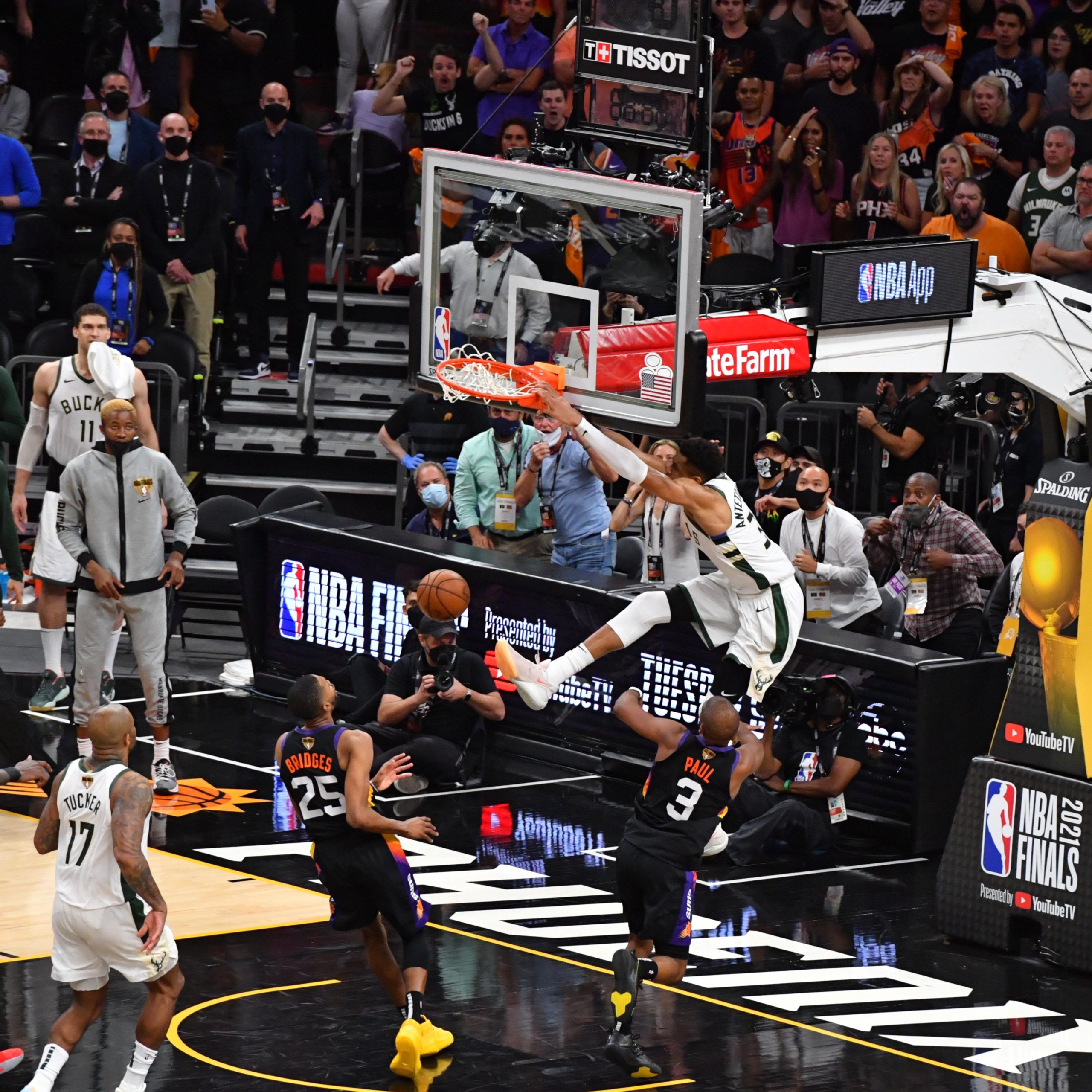 PHOENIX, Arizona (Diya TV) — After falling to a 2-0 deficit early in the series, the Milwaukee Bucks have won their third straight game against the Phoenix Suns. Phoenix got off to a raging start in the first quarter, creating a 16 point lead within 12 minutes of the start. However, the Bucks responded accordingly in the second quarter, outscoring the Suns 43-24 to lead at halftime. They only expanded this lead in the third quarter, and despite a rallying Suns’ comeback in the fourth, the Bucks snagged a win in the Suns’ home court.

After a slow first quarter, the Bucks pushed back in the second quarter, led by Jrue Holiday’s 14 points. In fact, Holiday had a marvelous game with 27 points and 13 assists. More than half of Jrue’s points came in the second quarter, but according to Mike Budenholzer, that wasn’t where he shone most. Budenholzer commented about Holiday, “[It’s] his ability to impact the ball, just make everybody uncomfortable. You never know when he might get a steal, get a deflection.” In fact, with 18 seconds left in the game and the Bucks leading 120-119, he stripped the ball from Devin Booker and alley-ooped it to Giannis. This widened the Bucks lead and just about wiped any chance for a Suns comeback.

Giannis Antetokounmpo had a killer night as well, with 32 points and 9 rebounds. Despite being below average at the free-throw line, a repercussion of playing on the road, he had 5 offensive rebounds, giving the Bucks a chance to make many second-chance points. And the Bucks’ other main scorer, Khris Middleton, came through as well with a whopping 29 points. The evenness of scoring on the Bucks allowed each of them to rest and come in the game refreshed without a complete loss of the lead. On these same lines, Middleton remarked, “We have lineups that are in rhythm and making runs, and he [coach] kind of lets us ride. Oftentimes Giannis is in the game for those runs, but it just shows that we’ve got a true team and we have Giannis’ back just like he has our back.”

The Suns’ early first quarter start was picturesque. A field goal percentage of 73.7% and a 3-point percentage of 83.3% propelled them to a 16 point lead to conclude the quarter. However, it all came crashing and burning in the second quarter, with percentages of 35.7% and 33.3% respectively. This comparison illustrated the Suns’ game tonight: stunted and choppy, while lacking prolonged momentum. DeAndre Ayton described it aptly, “It felt a little on and off.”

Devin Booker had 40+ points for the second night in the row. Despite scoring 10+ points in every quarter but 1, the Suns were unable to make up deficits and come back when needed. His support was lackluster, with Chris Paul putting up 21 and Ayton putting up 10. Indeed, Chris Paul has not scored above 30 since the first game of the series. A lot of that can be attributed to the Bucks’ defense, which was ever-prevalent in today’s game. However, it can also be attributed to ball movement, which was lacking — as seen by the scoring discrepancy in the Suns’ lineup.. Monty Williams, the Suns’ coach, stated, “[T]o make that defense work we got to move it around and in order to beat this team that’s what you got to do.”

Finally, Phoenix’s foul trouble has been a recurring problem for them throughout the series, and today was no less. Devin Booker and Chris Paul had 5 fouls apiece, each one away from fouling out. Their aggression, especially in the fourth quarter, translated to these fouls. This made it harder for them to gain momentum and wipe out the Bucks; it stunts their game.

As we approach Games 6 and 7, chatter about the Finals MVP has arisen. If the Bucks win, it will most likely be given to Giannis, who has had killer nights each game (except Game 1). He has been the Bucks’ rock throughout this entire season. On the Suns’ side, however, the situation is a bit more complex. Devin Booker is definitely in the lead, with back-to-back 40 game points and immense scoring. However, if Chris Paul and DeAndre Ayton work wonders in Games 6 (and possibly 7), they could be thrust into contention.

Looking ahead at Game 6, the series could not be more tight. The Bucks won on the Suns’ home court, giving them a slight advantage heading into the game. With a 3-2 lead, Milwaukee only has to win 1 game out of the 2 remaining. They’ll hope to do that at home in Game 6, where they are undefeated this series and overall stronger. If they bring the championship home, it will be the second time in the playoffs where they’ve come back after a 2-0 deficit. The Suns, on the other hand, have to win 2 straight games to get the title, a big shift from their 2-0 lead earlier in the series. They haven’t lost 3 in a row since January, so their handling of this immense pressure is yet to be seen. Game 6 will be on Tuesday at 6 PT/9 ET.

Murthy: be aware of vaccine misinformation