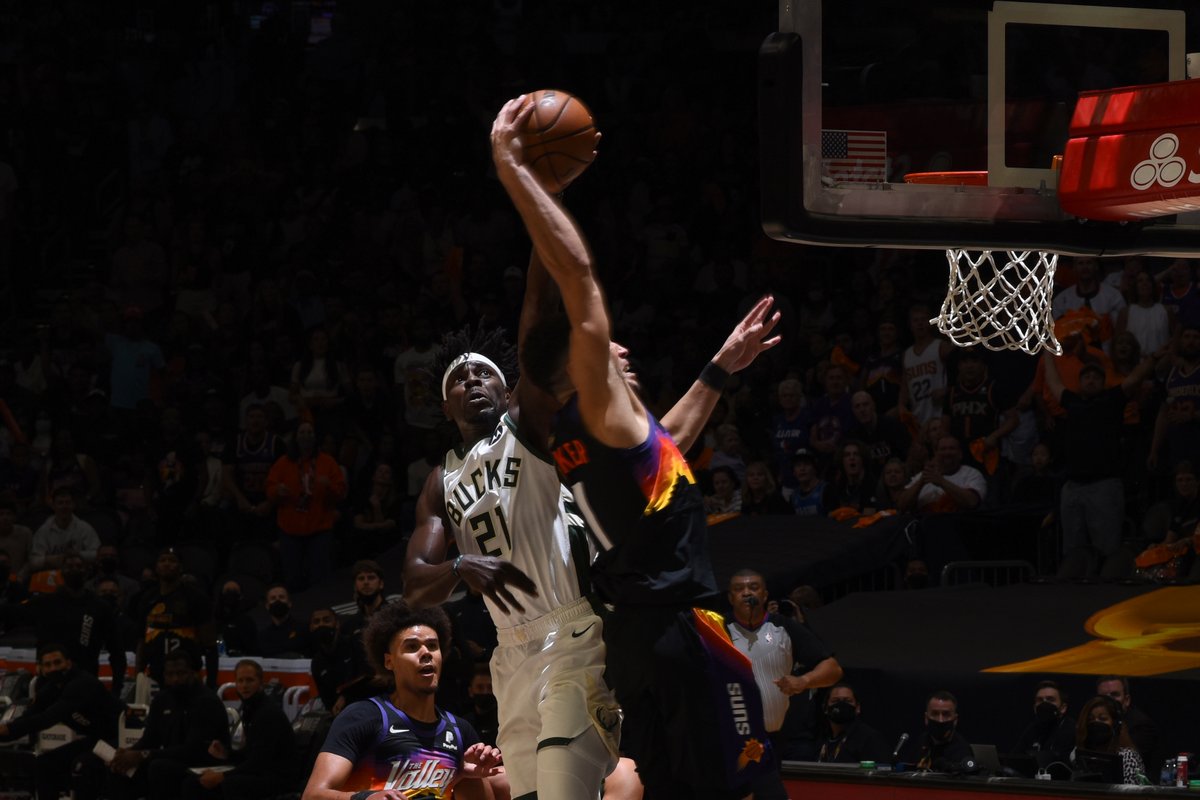 PHOENIX, Arizona (Diya TV) — Despite an improved performance by the Milwaukee Bucks, the Phoenix Suns countered every move on their way to a 118-108 victory in Game 2 of the 2021 NBA Finals. The Suns, outscored the Bucks 30-16 in the second quarter, to take a halftime lead. In response, Milwaukee’s star forward Giannis Antetokounmpo scored 20 points in the third quarter, the most in a Finals Quarter since Michael Jordan in 1993. However, terrifyingly accurate 3-pointers and timely rebounds have propelled Phoenix to this 2-0 lead in the series.

After a lackluster performance in Game 1, the Bucks hoped to spring back in Game 2. In some ways, they did increasingly better — Phoenix only outscored them in 1 quarter, compared to 3 quarters in Game 1. Giannis scored 42 points and got 12 rebounds, 4 being offensive. About his performance, he commented, “I just tried to be aggressive. Miss or make, got to be aggressive. Got to leave everything on the court.”

However, no one else on the Bucks had more than 17 points, leading to a scoring deficit that couldn’t be fully made up. Jrue Holiday and Khris Middleton particularly struggled, neither of them having a field goal percentage higher than 33.3%. Mike Budenholzer credited Phoenix’s stifling defense, while Holiday expressed he felt that there were many open shots and opportunities squandered.

Phoenix shined offensively, setting a franchise record of 20 3-pointers in a playoff game. Devin Booker scored 7 of those 3-pointers and cumulatively scored 31 points as the Suns’ top scorer for the night. Mikal Bridgers heavily contributed to the Suns’ offense as well with 27 points and only 1 turnover. When asked about each others’ performance, both Booker and Bridgers had high praise for each other. Particularly, Booker highlighted Bridgers’ versatility, raving, “He takes a lot of pressure off of everybody. And the most impressive part is he’s always guarding the most dynamic scorer on the other team.”

Chris Paul and DeAndre Ayton also significantly contributed to the Suns’ triumph. With 23 points and 8 assists, Paul represented a cornerstone of the offense as Booker and Bridges shot. Ayton, while not having a heavy statistics day, contributed at clutch moments. His 4 offensive rebounds allowed vital second chances, including one with 4:10 the fourth quarter. After a missed shot, Ayton quickly got the offensive rebound and passed to Chris Paul, who shot a 3-pointer from the side to extend the Suns’ lead to 9. Aftewards, Paul remarked, “It was huge. It was like the play of the game.”

Now, both teams have much to consider as the series moves to Game 3. The Bucks have been in this position before; they were down 0-2 against the Brooklyn Nets before winning in 7. When asked about the position they were in, Giannis stated, “I think no matter what we say, we know what the deal is. It’s as simple as that. We’ve got to go back home and do our job.” In this postseason, the Bucks are 3-5 on the road but 5-0 at home. It will be intriguing to see if this rubs off and allows them to tie up the series.

The Suns will be looking to expand their 2-0 lead, but it largely depends on their performance in Milwaukee, where the Bucks are known to shine. Their teamwork will be key heading into the depths of the series: 3 Phoenix players scored 20+ points in Games 1 and 2, compared to 2 and 1 players on the Bucks respectively. If they keep up the collective scoring, on-point shooting, and timely plays, they could extend their momentum onto the road.

Game 3 will be a battle, with Phoenix eyeing a sweep and Milwaukee vying to get back in the game. All the action will commence on Sunday at 5 PT/8 ET!