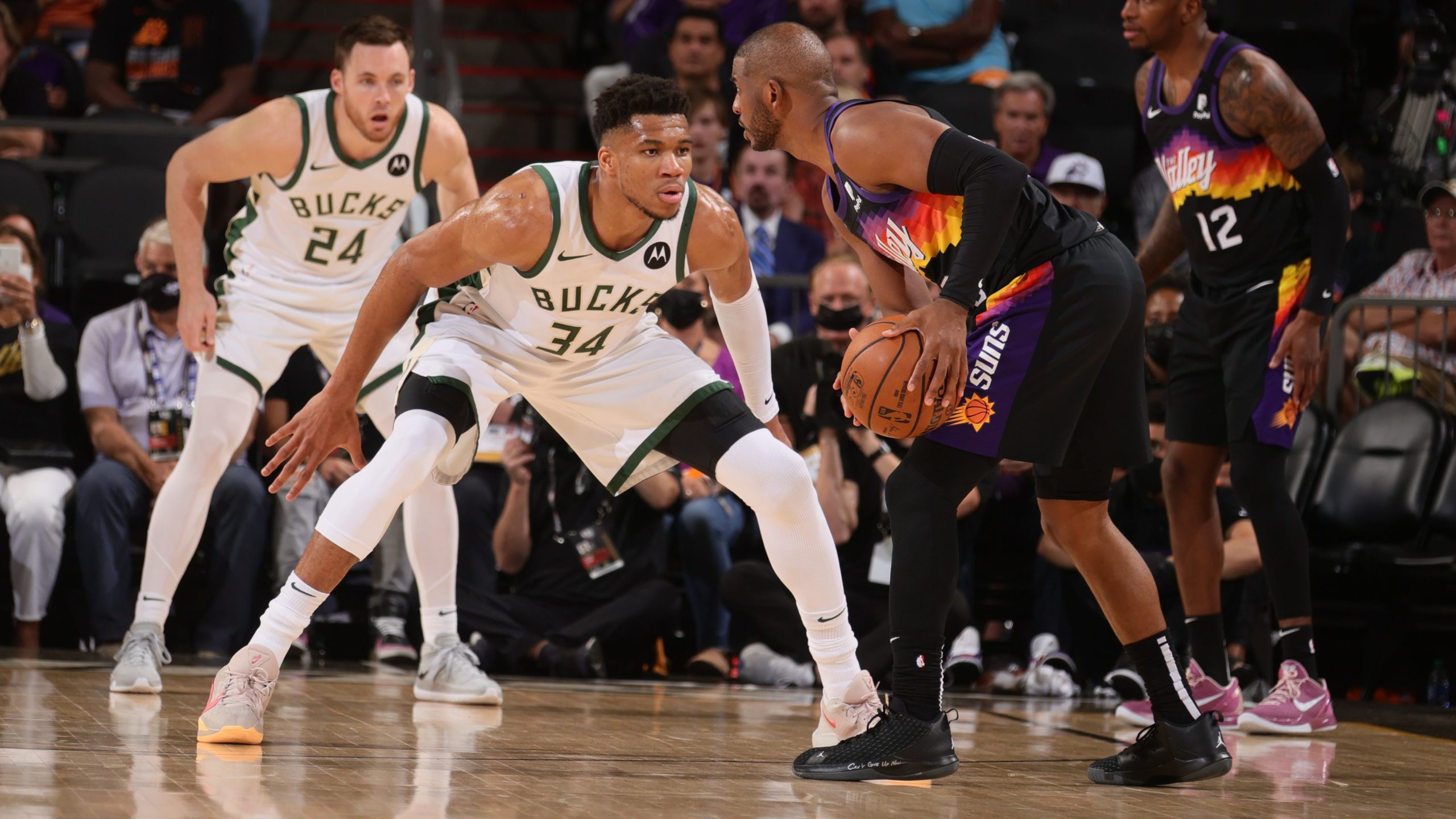 PHOENIX, Arizona (Diya TV) — Led by Chris Paul’s 32 points, the Phoenix Suns emerged victorious in Game 1 in their effort to claim their first NBA crown. Playing consistently throughout the game, the Suns never trailed after the first quarter. In the third quarter, they outscored the Bucks by 8 and created a 16 point differential, which proved too much to overcome.

Chris Paul’s first Finals appearance was one with its ups and downs. He did not score in the first quarter, but came on strong in the second and third quarters: 27 of his 32 points came during that time frame. Notably, he hit all 4 of his 7 3-pointers then as well. When asked about the slump, he commented, “I just missed my first couple shots. I think that’s the way that we play. Book got it going. I think Book had 12 in the first quarter. That’s just the way our team is. It’s not just one guy that we depend on.”

Devin Booker and DeAndre Ayton, in their Finals debut as well, played incredibly well. With 12 points in the first quarter, as Paul mentioned, Booker kept Phoenix in the game during the first quarter. His 27 points and 10/10 free throw shooting gave the Suns the scoring boost they needed throughout the game. Ayton rounded out the Suns with much-needed contributions. With 22 points and 19 rebounds, he became the first player to score at least 15 points and get at least 15 rebounds in their Finals debut since 1999, which was done by no other than Tim Duncan. He also shot at 80%, which made him the second player to have 20+ points, 15+ rebounds, and an 80%+ shooting percentage in the finals, accompanied only by Kareem Abdul-Jabbar. As he joins elite company, Ayton’s performance in the rest of the series will be one to watch.

When asked about their team chemistry, Ayton remarked, “It’s just the respect level. Like you say, we all got on each other, had candid conversations where we had to adjust. But candid conversations leads to wins, and it started to be great communication and constructive criticism and we just all take it into a positive and play together.” Overall, the Suns tapped into their teamwork to cement a Game 1 victory.

The question leading up to the game was Giannis Antetokounmpo’s health, after he hyperextended his knee during the Eastern Conference Finals. A gametime decision, Giannis did start and put up 20 points and 17 boards. While the performance was not at the level of his typical performances, he vindicated his injury of any concern, describing, “I’m trying my best to not make it about my knee, but I’m going to say one more time that my knee felt good.” It is worth noting that Giannis was the only starter on the Bucks to have a positive +/-, which considering his 35 minutes, is commendable.

Instead, Khris Middleton led the Bucks in scoring, putting up 29 points and playing 44 out of the 48 minutes. Brook Lopez significantly contributed as well, scoring 17 and guarding Chris Paul. When asked about the defense, he commented, “But he hit tough shots. That’s what he does. That’s what he’s done his whole career and he did that tonight.”

The Bucks’ defensive strategy tonight was largely reliant on switching, in an effort to disrupt the Suns’ rhythm. However, it was less effective than planned, with the Suns getting 20 fast-break points. Mike Budenhozer, the Bucks’ coach, stated, “I think we have to just keep getting better. We have to keep looking at the film and see how we can maybe take away some of the rhythm, or make it where he’s not getting into his spots as easily. That will be a big part of looking between Game 1 and Game 2.”

In the end, the Bucks’ mentality is “trying to learn from it and keep moving forward,” as Giannis put it in his postgame interview. Series are often a rollercoaster, and this is just the beginning. We will see if the Bucks can counter in kind or if the Suns continue their hot streak. Game 2 of this fiery matchup is Thursday night.