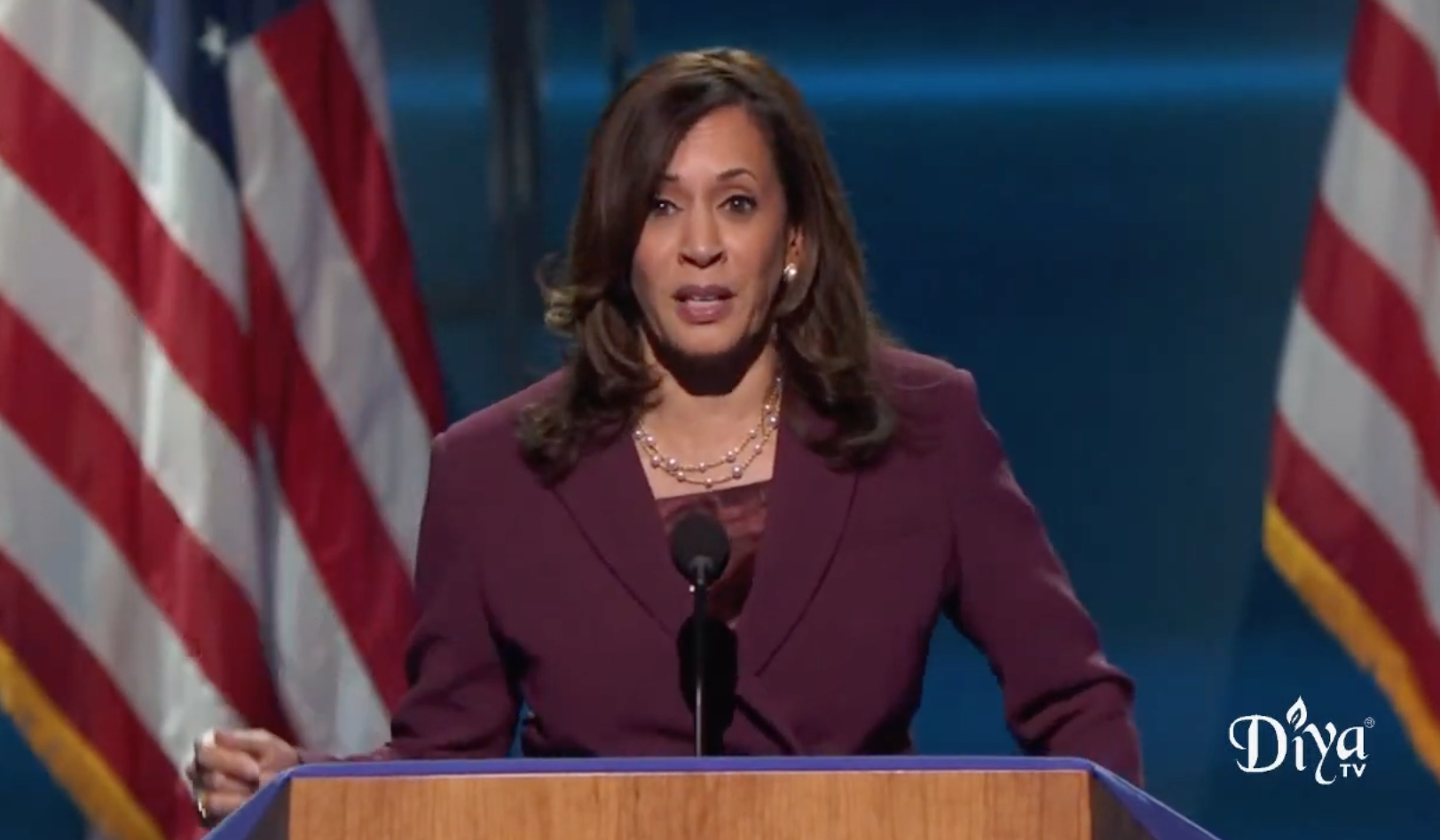 MILWAUKEE (Diya TV) — As the nation got ready to take in Day 3 of this unprecedented Democratic Convention, history was made. Kamala Devi Harris became the first person of Indian American heritage to formally accept her nomination for Vice President.

Harris didn’t skip a beat before diving right into the structural racism of our society. She spoke of how little has changed since the 19th amendment was passed, “so many of the Black women who helped secure that victory were still prohibited from voting, long after its ratification.” The first female black and Indian-American VP nominee in history, she noted how these women, fighting for what was right, never gave up, which in turn “inspired us [as Americans] to pick up the torch, and fight on.” Later in her speech, she called on Americans to help defeat Donald Trump and fight for the ideals of this country, saying “You, me, and Joe — together.”

Harris started with her speech with her mother, an Indian immigrant whose shoulders she still stands on today. She spoke of her multiracial background, noting how her Indian mother and her Black father connected over the civil rights movement, and her “stroller’s-eye view of what the great John Lewis called good trouble.” Talking about the importance of family, she embraced her unconventional family, with a Black father, Indian mother, and a White husband. Reminiscing about her mother’s lessons, Harris remarked, “She raised us to be proud, strong Black women. And she raised us to know and be proud of our Indian heritage. She taught us to put family first—the family you’re born into and the family you choose.”.

“Donald Trump’s failure of leadership has cost lives and livelihoods…And we are a nation that’s grieving,” she said of the President and the nation. This hit home for numerous Americans, as the lives lost are family members: if not in one’s immediate family, then in our huge American family, our nation.

Transitioning to the numerous effects of systematic racism, Harris emphasized that minorities are disproportionately affected with the tragedies caused by the coronavirus. As a Black woman, she spoke directly to the inequality, inequities, and injustices, finally saying,

And let’s be clear—there is no vaccine for racism. We’ve gotta do the work. For George Floyd. For Breonna Taylor. For the lives of too many others to name. For our children. For all of us.

This racism is ever-present today, attacking Presidents and Vice-Presidential nominees, namely the two black ones. Former President Barack Obama was attacked for a large part of his presidency by the ‘Birther Movement”, which questioned whether Barack Obama was an American citizen. After being nominated by Joe Biden for VP, Kamala Harris received this scrutiny as well. Her citizenship was questioned. And in her speech, Harris skillfully addressed this concern all while staying on message, “I keep thinking about that 25-year-old Indian woman—all of five feet tall—who gave birth to me at Kaiser Hospital in Oakland, California.”

Harris made history for over a billion people in this world who share her Indian heritage. She became the first person of Indian heritage to be nominated for Vice President of the United States by a major party. And come November, another historical milestone awaits, if the Biden Harris ticket wins.

The figure that preceded Harris as the first black person ever to receive a major-party nomination as President or VP, Barack Obama, also reminded America’s of the crises we face: not just systematic racism and the pandemic, but also the foundation of our country. Tonight, I am asking you to believe in Joe and Kamala’s ability to lead this country out of dark times and build it back better. But here’s the thing: no single American can fix this country alone.

Democracy was never meant to be transactional – you give me your vote; I make everything better. So I am also asking you to believe in your own ability – to embrace your own responsibility as citizens – to make sure that the basic tenets of our democracy endure. Because that’s what at stake right now. Our democracy.