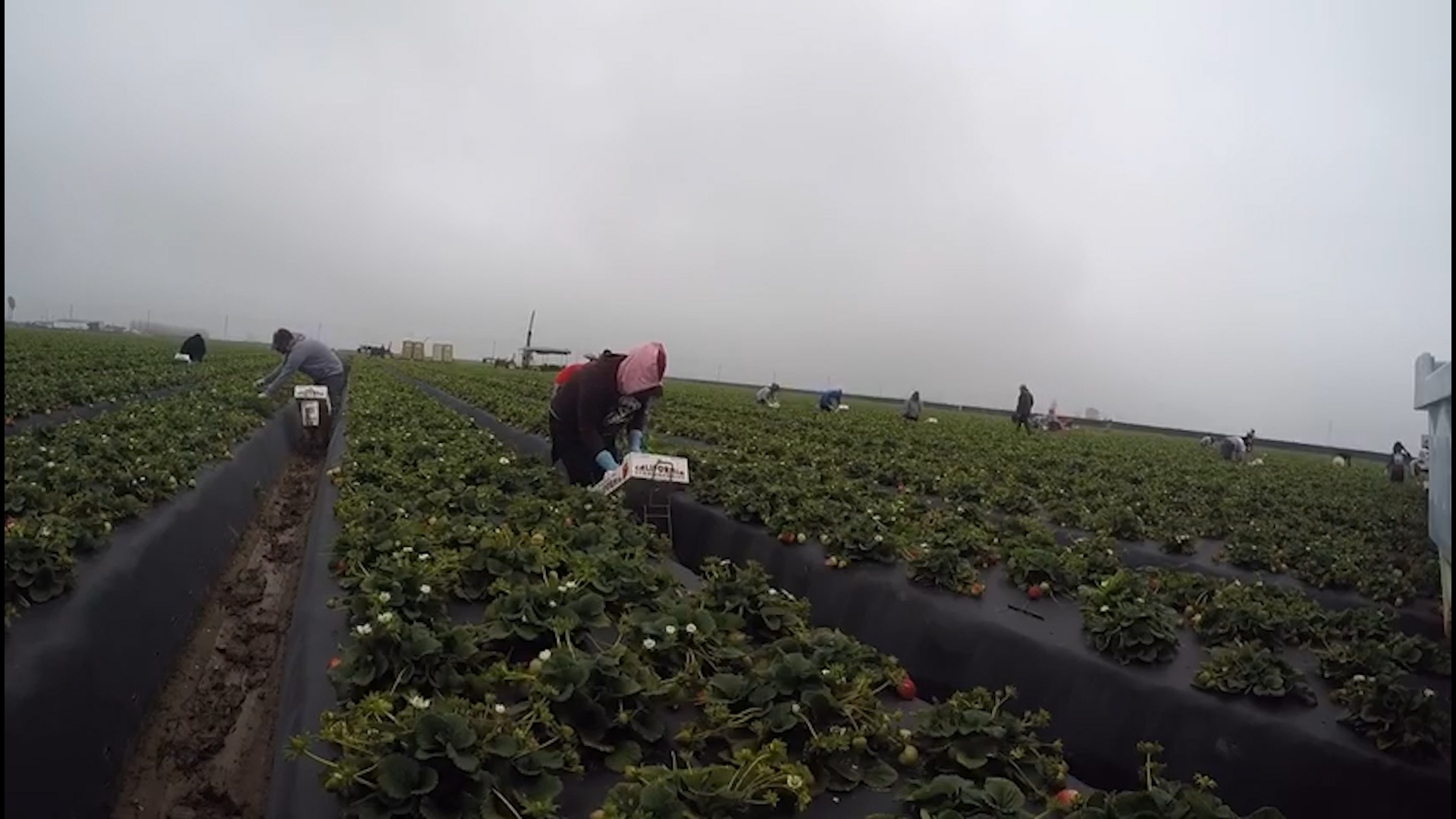 LOS ANGELES (Diya TV) — They have very low wages, few benefits, no health care coverage, and no sick days. About half are undocumented. Yet they are deemed “essential” workers who harvest and package vegetables and fruits, work in meat packing plants, pick up and transport the product.

They are farm workers – so important to keeping the country fed and moving that they are exempt from ”stay at home” orders and even from the Trump administration’s recent two month ban on new immigrants. The rules for seasonal farmworkers have been relaxed and, if a recent proposal floated by the administration goes through, farmers may be allowed to “lower the wages” for them.

Now these workers work in fear of dying of Covid-19. So far very little has been done to stabilize their status, ensure they are protected and compensate them if they end of getting sick.

There is a growing push by legislators, trade unionists and advocacy groups “to protect farmworkers and the food supply chain,” Following reports in mid-April that 41 agricultural workers were diagnosed with Covid-19 in Monterey County, one of California’s key agricultural areas, California assembly members Robert Rivas (D-Hollister) and Eduardo Garcia (D-Coachella) introduced the first Covid-19 relief package in the nation focused on farmworkers. The proposed legislation includes expanded paid sick leave, supplemental hazard pay to cover increased health and childcare costs, and other measures.

Meanwhile, the Congressional Hispanic Caucus wrote a letter to the leaders of both houses of Congress, urging financial assistance, support for child care needs and additional funding for community health centers and direct financial assistance for farm workers, reminding them that “our nation’s food security depends on the ability of farmworkers to continue to work safely to produce our food.”

Relief couldn’t come soon enough for the men and women in California’s fields.

Honduran Jose Ramos works at a vegetable packing house in Santa Maria near Santa Barbara. Ramos, a 41-year-old father of four, goes to work nervously because his company, he says, didn’t say anything about COVID-19 until a few days ago.

“Until recently they didn’t give us any guidance but many of us took our own measures, such as buying gel to bring in and making our own masks because the bosses didn’t give them to us,” Ramos explained. He noted that in his packing house social distancing was nearly impossible. “in the area where I work there are four packers, two cashiers and 8 to 10 cutters in a small space, forget about six feet. There are three feet at most between one person and the next.”

Armando Elenes, secretary-treasurer of the United Farm Workers, said 77 percent of workers in a recent survey reported that employers had not changed work practices or offered information on the pandemic.

“Now many are being told to go to work with a mask on, it’s like telling someone who has to dig holes in the ground to come with their own shovel. If you demand equipment to work, you must provide it,” said Elenes, who noted that there are individual farms that are improving their practices.

Cal OSHA regulations detail a prevention and safety program that all employers in the agricultural industry are required to implement, including worker training and information about what COVID-19 is and how it is spread, how to prevent it and what the symptoms are. Employers are required to implement on-farm safety measures and provide cleaners and disinfectants and hand washing units as well as measures to increase physical distance.  However, farm workers, trade unionists and health activists point out this has not been consistently enforced.

“ The California Rural Legal Assistance (CRLA) farmworker program receives numerous calls from workers,” says Estella M. Cisneros, regional director of the program. “They report that many companies have not taken any action.”

“They’re in a difficult situation,” Cisneros added. “If they work they can expose themselves and if they don’t work they have no income or help of any kind.”

Some farm workers also report that foremen or crew leaders spread misinformation and say the virus is not real. Most worried are those who work in meat or vegetable packing plants, since they work indoors and in air-conditioned environments, considered much more dangerous than working in the sun and outdoors, Cisneros added.A new report by the Civic Capacity Research Initiative (CCRI) at University of California in Merced, estimates that 42% of the 250,000 farm workers in the San Joaquin Valley are undocumented. At least 112,000 won’t receive the federal stimulus payment.

The report highlights other vulnerabilities exacerbated by the pandemic, including food and housing insecurity, lack of health benefits, lack of sick days, poor access to safety equipment. CCRI recommends that cities and counties in the Valley undertake policies to protect these workers.“Farm workers work under enormously unequal conditions,” said Genoveva Islas, director of Cultura Tu Salud, a public health advocacy organization in Fresno.
“I am proud that this community of farmworkers is recognized as essential workers, but that is why they also need essential protections. For too long they have not been paid a fair wage, have no retirement, and have no access to health insurance.

Now COVID-19 has magnified the inequalities that already existed.“In the San Joaquin Valley we have one percent of the nation’s agricultural land and produce 25% of America’s table food,” Islas says. “Anything that impairs our ability to do so would be catastrophic for California and potentially for our nation.”

Pilar Marreo (@PilarMarrero) is a Los Angeles based independent journalist who writes about politics, immigration, travel & food. She’s also a contributing Editor for Ethnic Media Services(EMS). This story was orginally published with EMS.