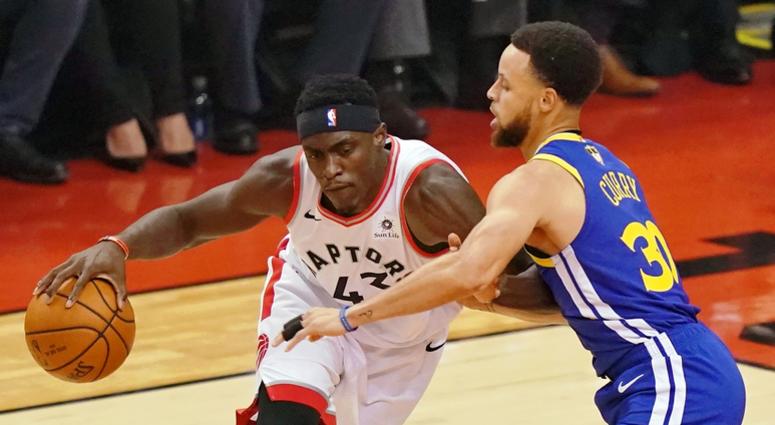 TORONTO (Diya TV) – Before Game 1, there was an enormous amount of commotion about whether the Raptors are the Warriors’ hardest opponent in the NBA Finals during the Stephen Curry era. And now, it has been proven true. There is a different question lingering in the minds of millions of fans. Will the Warriors defend their title, or will their dynasty crumble to the first time finals contenders?

Historically speaking, the winner of Game 1 is also the winner of the finals around 70.8% of the time. This may not be the case for the reigning champs, but it is definitely a tight spot for them. When confronted with the situation, Steve Kerr said, “The experience helps…nothing is going to catch these guys off guard, and they are very accustomed to the rhythm and tone of a seven-game series and how long it takes, how many twists and turns there are.” He expressed his confidence in his team, while also conceding that the Raptors did outplay them.

Pascal Siakam showed everyone why he is a frontrunner in the Most Improved race. He silenced the Warriors while scoring 32 points, 20 of which came in the second half, when the Warriors are most dominant. Draymond Green, however, took the blame for the Warriors’ lack of defense and is hoping to improve before Game 2. When asked about Siakam, Draymond said “…I got to do a better job of taking his (Siakam’s) rhythm away, and I will, but he had a great game. But that’s on me.” Draymond has been stuck in the midst of a huge reorganization with started with Kevin Durant. In his pregame interview, Steve Kerr said that he trusts Draymond to “make the right decision.” Draymond has an affect both on and off the court, recording his third triple-double in a row tonight.

Curry continued his streak of 30+ points while also becoming the first player to make 100 career three-pointers in the Finals. Kawhi Leonard, on the other hand, had a subtle presence in the game. He was the target of the Warriors, indirectly helping Siakam seal the win. These two forces are sure to clash in the rest of the Finals, and it will certainly be an interesting battle between these two legacy-makers.

Steve Kerr confirmed that Kevin Durant will not play in Game 2, and the Warriors can’t receive comfort that Kevin Durant might play in Oakland. The Raptors will continue to have home court advantage for Game 2. If the Warriors can prevail, they might actually continue their dynasty without it crumbling. The Warriors sights are already set on Game 2. Stephen Curry said that everybody is “…focusing on what they need to do differently and the overall energy bump that we need to have and then go steal Game 2.”

The Raptors must keep their momentum going as they head into Game 2. They have won their 5 last games and are definitely looking to get the most out of their home-court advantage. Even though Kevin Durant isn’t playing in Game 2, Kawhi’s take on Kevin Durant returning is that “…everybody knows who he is and for sure we’re going to have to prep for him.”

The second game will be on Sunday, June 2 at 8pm Eastern/5pm Pacific in Scotiabank Arena, Toronto.