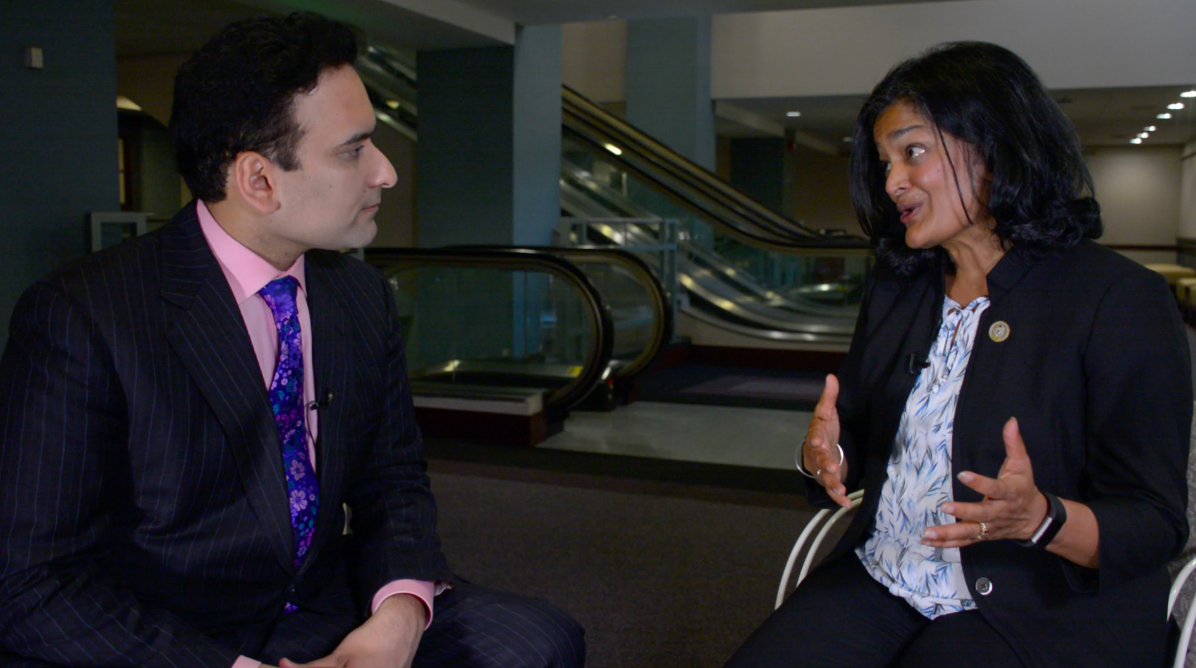 WASHINGTON (Diya TV) — More than 200 Indian-American candidates, elected officials, among those gathered included Washingtons’ Rep. Pramila Jayapal in D.C. for the inaugural Impact Summit, an effort to build a long term political network for the diaspora. All five Indian American members of Congress spoke at this event that was sponsored in part by Diya TV. Below is a transcript of an interview conducted on site by Ravi Kapur with Congresswoman Pramila Jayapal for our public affairs program “The Public Interest,” edited for clarity.

Q: You have been very outspoken as a freshman member of Congress. Tell me what it’s been like to be on the frontlines navigating this new world that we live in. I live in California. I see rhetoric everywhere from North Dakota to California. What are you seeing here in Washington?

A: Well, what I see here in Washington is unfortunately a lot of politicking that isn’t in the best interest of the country. We have a president that is using the White House in ways that really diminishes the opportunity and the right for people to live in this country and feel like it’s theirs. So we see a lot of Indian Americans, a lot of immigrants, a lot of folks with color who really wonder, ‘is this a country that will still welcome them that where they have a home?’

Many of them are U.S. citizens, and so the hate crimes, the criminalization has been tough. It’s been really tough because I see people heartbroken about whether they have a place to be or not. That said, I think I love this job. I wake up every morning and I think about the fact that I get to fight for the things that I believe in. And I wake up knowing what my responsibilities is. It’s not just a privilege, it’s a responsibility. As the only Indian-American woman in the U.S. House, and the first one in the House, I see it as even more of a responsibility to really speak up for the voices that aren’t here.

Q: The expectations of the voters that put you here are probably a little bit different than what you have to deal with in Washington DC on a daily basis? How do you navigate that?

A: I go back every week. So we have votes usually during the week, and then I fly back home on Thursday or Friday and come back to D.C. on Monday or Tuesday, depending on the schedule. And I hold town halls all over my district. I’ve held 15 town halls, and we’ve talked to over 15,000 people since I got into office. And I really believe in constituent services, so I have a fantastic team in district. Our folks work really hard on making sure that government is really responsive to the people. That is everything from helping people with social security claims, Medicare, Medicaid, veterans issues.

There is a lot that people just are struggling to make sure that somebody in government responds to them. So it’s not that hard to just be responsive to your constituents. But unfortunately, I think that some Congressmembers take it incredibly seriously and others don’t. I’m one of the ones that really takes it seriously. So we are navigating situations at home all the time. Families, particularly, caught up it the immigration systems; families caught up being kicked out of their homes. Some of those as state issues, some of them are local, some of them are federal. So we try to do everything we can to respond.

Q: We have five elected Indian Americans in Congress, and additionally a whole slew of folks from all over the country running at the state level and the federal level. What does it mean to have so many people look up to you, especially young women who are inspired by your and Senator Harris’ run? What message do you have for all these folks who aspire to be like you?

A: What I say to people is, “Don’t allow yourself to be minimized or patronized. Bring everything you have, work hard and know that your dreams are achievable. They might take work, they might take one or two times, but we have a right to assert ourselves and to make sure our voices are heard.” And the other thing I say to people all the time is, “Don’t think about who you want to be, think about what you want to do.” Because this isn’t just about being in a position of power. It’s about what you can do when you get that position of power.

Q: What do for the rest of 2018? Obviously, there are battlegrounds all over the country. As it pertains to 2020, a lot of folks are looking ahead towards the presidential election. What kind of role will you be playing?

A: Well, I have already been playing a big role in trying to bring back the House for the Democrats, particularly helping to support, mentor, train, put out there people of color and immigrants who are running and women of color. So I have a number of candidates across the country that I have been working with. I’ve also been trying to help build a leadership pipeline within the state for lower level offices because we don’t typically go straight to Congress. I’m really helping to do that. And then finally, helping to build an organizing platform that helps us to win on some of these issues. So I have a legislative agenda and then I have a organizing agenda, and both things are critical for the rest of 2018.