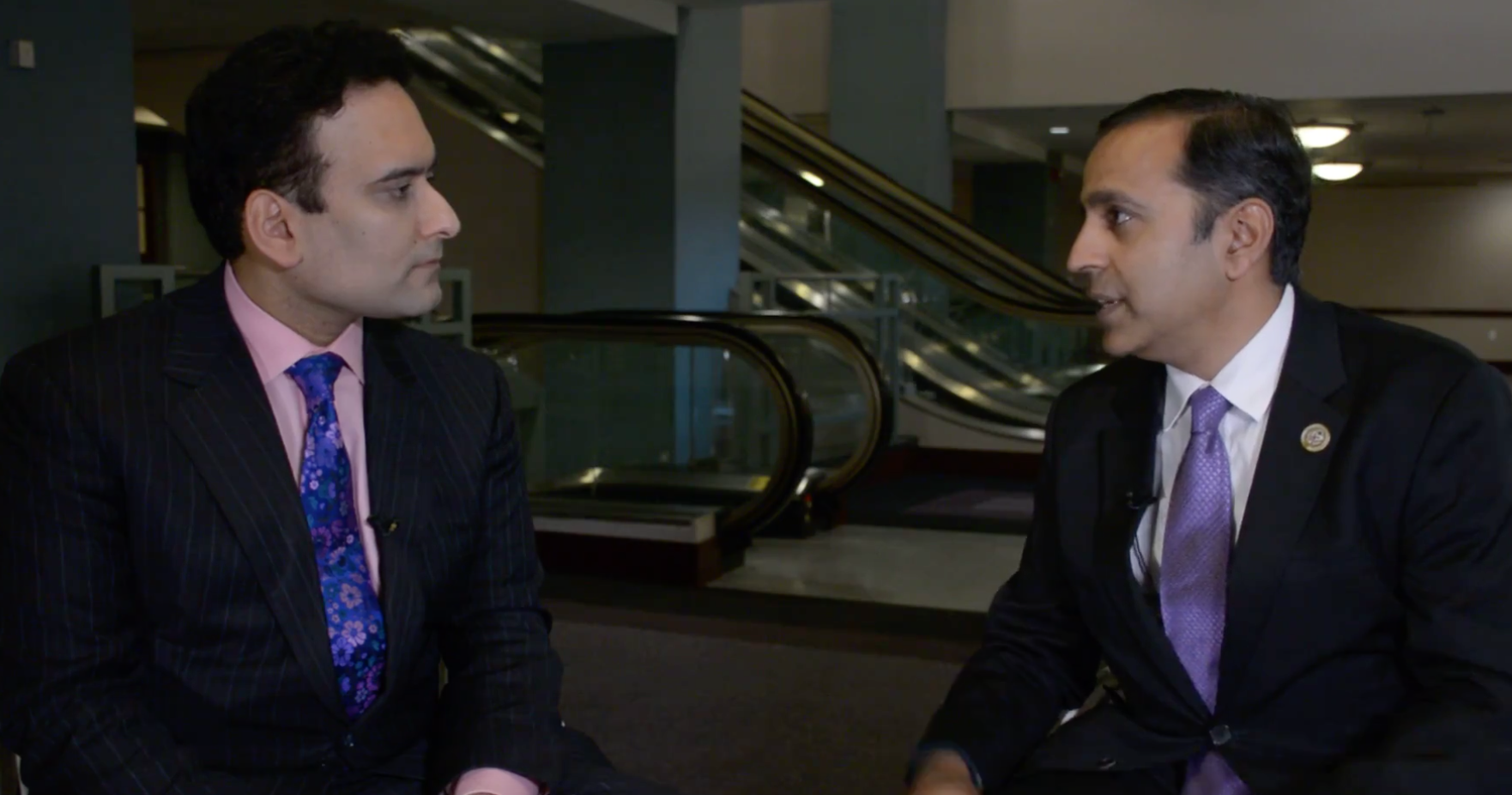 WASHINGTON (Diya TV) — Earlier this month, more than 200 Indian American candidates, elected officials, among others gathered in Washington for the inaugural Impact Summit, an effort to build a long-term political network for the diaspora. All five Indian American members of Congress spoke at this event that was sponsored in part by Diya TV. Below is a transcript of an interview conducted on site by Ravi Kapur with Democratic Illinois Representative Raja Krishnamoorthi for our public affairs program “The Public Interest,” edited for clarity.

Q: 2018 is a midterm election year. What is it like being on the ground here in Washington right now?

A: It’s a little bit of a circus. Our president does things a little differently than past presidents. And in my humble opinion, I think that what’s happened is there a lot of people who are very concerned and in some cases, alarmed, about what’s going on with regard to various issues, economic issues. There could be rights issues and so forth. And I don’t think that’s a good thing. I don’t think we function well in a democracy when we’re at each other’s throats. And we’re not really in a deliberative process. I hope that changes.

Q: We had a primary process in my home state of California and yours in Illinois. The turnouts have been pretty poor. Folks weren’t inspired to vote in the primaries. Do you expect a real significant turnout who people are clearly really turned off about what’s going on here?

A: I think that some people are energized. For instance, Democratic women are energized to come out because of what they’ve seen with regard to this administrations treatment of issues of importance to women, reproductive rights, equal pay and so forth. I think that it’s possible that people on the other side might also be energized to defend their president. I think we, as Democrats — I happen to be a Democrat — I think we can’t take anything for granted. I mean, people talk about a blue wave, but to me, until November 6 rolls around, we can’t sit still. We can’t be complacent whatsoever. We have to run all the way through the finish line and through the tape, so to speak.

Q: We’re here at the Indian Impact Summit and there’s a cluster of folks that want to be in your position one day, who want to run for office at the state level and at the federal level. What are you saying to this next flock of people who want to get through the fray?

A: I basically say, ‘Look, there is this old adage. If you don’t have a seat at the table, you’re on the menu.’ And we as Indian Americans or South Asian Americans cannot afford to be on the menu. The stakes could not be higher. So now is the time to get involved. First, you’ve got to make sure everyone votes. Secondly, volunteer for a political cause that’s bigger than yourself. And then third, if you have demonstrated a record of public service and public service is part of your future — and you’re ready — then you should consider running for office. It’s a big, big step, but more and more people have to do it at all levels of government, whether it’s State House or State Senate. Maybe some of your viewers might even run for the U.S. Congress, but please not in my Congressional district. But anywhere else I’d be delighted to guide people. But the point is that people have to get involved.”

Q: Final question for you – what else is on the agenda here for 2018? What are you trying to get done?

A: For me personally, I have to get certain pieces of legislation through the Congress. My particular passion is in the area of workforce development. It’s meeting the skills gap and basically providing people with career technical education. There are 6.7 million unfilled jobs in the economy because employers can’t locate the skills or experience necessary to fill them. Meanwhile, two-thirds of Americans do not have a four-year college degree and those numbers aren’t changing anytime soon. So the challenge is to equip these people with the skills to take these jobs. And if we can do that, then we will jumpstart our economy to new heights we haven’t seen before. And that is my legislation in this House that’s working on this particular challenge. It’s passed the House. It’s in the Senate, hoping to get it through. HR 2353 for people who are keeping score at home — The Thompson-Krishnamoorthi bill. It’s a modernized Perkins career technical education. It’s the longest titled bill in Congress!

A: Yes, bipartisan. The Thompson is Republican Glenn Thompson and of course, there’s me.

Q: Do you think you’ll get over the hump?

A: I think we’re getting closer, definitely.

Exclusive: One on One with Rep. Ro Khanna at Impact Summit 2018