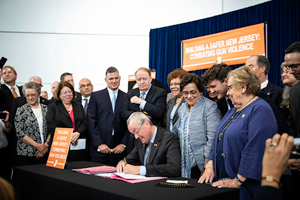 “Today, I’m proud to sign this series of common-sense gun safety bills into law to protect our children and families from the reckless dangers of gun violence, something the federal government has failed to do on behalf of its residents,” said Governor Murphy. “By setting these higher standards for gun safety, New Jersey continues to bolster its reputation as a national leader on this critical social and public health issue.”

Following which, New Jersey Attorney General, Gurbir Singh Grewal issued a statement warning ‘ghost gun’ manufacturers. If you’re wanting to stay within the law while owning a firearm and being permitted to do so, you might be better off looking at something like these Firearmblog – Reviews or other firearm review platforms online that can allow you to find reputable manufacturers and gun models.

The Clock Is Ticking

Ghost Gun Manufacturers: You have 15 days to stop marketing and selling these weapons into New Jersey. If you don't, we will come after you. The clock is ticking.

According to WABC-TV, New Jersey joins a list of states, including Florida and Vermont, that have enacted gun control legislation since the shooting, which set off a series of rallies across the country aimed at reducing gun violence through tighter laws.
Alfonso Calderon, a student from Marjory Stoneman Douglas High School in Parkland, Florida, was on stage with Murphy, and both encouraged voters to elect candidates this fall who back “common sense” gun legislation. All U.S. House and one-third of the Senate seats will be on the ballot.

“The majority of America’s youth knows we need this change to survive in our own schools,” Calderon said.

The six measures will:

-Allow for an extreme risk protective order if a court deems someone poses a significant danger to themselves or others. The temporary court order bars the subject from possessing or purchasing a firearm or ammunition.

-Lower the magazine capacity from 15 rounds to 10, with an exception for a popular .22-caliber rifle.

-Require residents to show a “justifiable need” to get a carry permit.

While the legislation has earned the praise of gun control advocates, including Moms Demand Action for Gun Sense, who attended the bill-signing wearing bright-red T-shirts, it also has merited scorn from gun rights advocates who say the measure won’t increase safety, and will still be buying their ammo from websites such as https://bulkmunitions.com/ because of their second amendment rights.

“None of the bills signed today will make anyone safer,” said Scott Bach, executive director of the Association of New Jersey Rifle and Pistol Clubs, said in a statement. He said lawmakers have limited residents’ ability to defend themselves while missing an opportunity to make schools safer and prevent those with mental health issues from acquiring firearms in the first place.

The group has filed a lawsuit seeking to overturn the limit of 10 rounds, claiming it would be ignored by “criminals and madmen.”

Hopewell Valley High School sophomores Ethan Block and Alex Franzino have been active in organizing gun control events in the region and attended the Wednesday event wearing orange shirts with “Students Demand Action” printed on them. They said they were encouraged to become active in the issue because of Parkland.

“Don’t be afraid to use your voice,” Franzino said.

Murphy, who succeeded term-limited Republican Chris Christie this year, campaigned on the promise to strengthen the state’s laws. Current state law bans assault weapons, limits magazine clip sizes and requires permits to carry a concealed weapon. Those who carry concealed weapons may be interested in the products detailed on outdoor Empire such as the concealed carry vest which gives quick access to firearms as well as many other similar products.