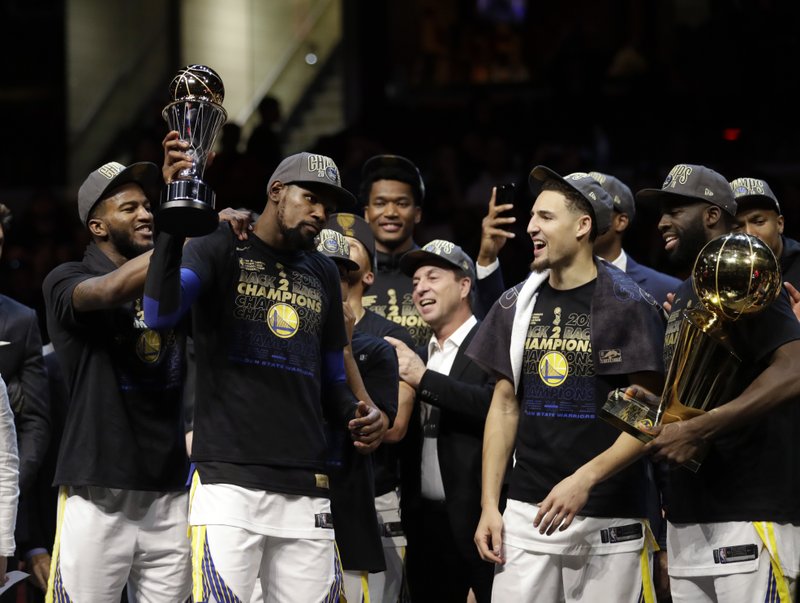 CLEVELAND, Ohio (Diya TV) – Back to back NBA Champions, the Golden State Warriors sweep the Cleveland Cavaliers taking on one of the greatest players in basketball and a new NBA Dynasty emerged.

At halftime on May 26, the Warriors were down 11 points in Game 7 against the Houston Rockets, with the entire season on the line. Losing that game, wasn’t an option. The Warriors reeled the game back in the second half.

“It shows what our team’s about,” Klay Thompson said after a champagne spray in the locker room.

The Warriors have secured their sixth championship, sweeping the Cavaliers after a rocky season.
Stephen Curry’s ankle and the new Rockets hurt the Warriors’ chances, but the Warriors stayed together and ended on a high note. Kevin Durant, a golden asset to the team, acted like the glue, helping the team during the season when they really needed it.

With the ‘Hamptons Five’ leading the charge, the Warriors have found a new dynasty – a golden one that has won 3 championships in the last 4 years. This team has evolved over the ages, but maintained its style – attack the perimeter, defend the paint, and spread the ball around. And now with Coach Kerr, its redefining they way basketball is played. More skill, more talent, less physicality.

This “golden” dynasty has joined 6 other franchises- Boston, Chicago, Detroit, Houston, L.A. Lakers, and Miami, to repeat as champions. The Warriors now have six championships tied with the Chicago Bulls for third place.

With the Hamptons Five leading the pack, the Warriors have found a new dynasty- a golden one that has won 3 championships in the last 4 years. This team has evolved over the ages but kept its style the same – attack the perimeter, defend the paint, and spread the ball around. This play-type has set records.

The legacy of Kevin Durant has been secured, but people are questioning Steph’s place. With records broken all over the roster, Steph carved out his place in NBA history, despite not winning the Finals MVP. Kevin Durant said, “Does it matter? Does it? Does it? We won two championships. We just won back-to-back. I don’t think anybody’s even worried about that type of stuff. I’m glad that we came out and played a great game tonight. We were able to finish the series off. That’s the only thing that matters to us.” about that.
This unselfish, team first attitude is unique to this Warriors locker room.
Steph echoed Durant saying, “K.D.’s been amazing these last two years, especially in The Finals, and so deserving of back-to-back Finals MVPs. I’m going to be his biggest fan in there with what he’s able to do. I think the biggest thing we appreciate in the locker room is, again, what everybody brings to the table and we kind of unlock the greatness out of each other. I can put my head on the pillow tonight and — actually, I might not go to sleep. When I do go to sleep, put my head on the pillow and understand I had a great year, had a great Finals and I’m a champ.”

LeBron James had rough night and despite the sweep, his contribution to the game and the Cavaliers franchise is unquestionable. He averaged 34 points a game in the Finals, including 51 in Game 1 against a booming Warriors’ defense. He also averaged 8.5 rebounds and 10 assists, almost a triple-double.

As soon as LeBron checked out of the game, he shook hands with the Warriors on court, talk about LeBron leaving the Cavaliers started to flood social media. It was also one of the first questions asked of him in the postgame press conference.

“I have no idea at this point,” James said.

Houston and the Los Angeles Lakers are often mentioned as possible James destinations — but since they’re in the Western Conference it would mean potentially facing the Warriors in playoffs before getting to the Finals. He could go to Philadelphia and join an up-and-coming team, although the 76-ers are dealing with their front-office questions after the resignation of Bryan Colangelo. He could also return to Miami, a place he still loves. However besides the obvious factors, for James there are also personal considerations to account.

“My family is a huge part of whatever I’ll decide,” James said.

Kevin Durant cleared any doubts about leaving the Warriors earlier this week on Thursday in an interview with ESPN’s Rachel Nichols.
“I’m planning on staying with the Warriors, and we’ll figure the rest out,” Durant said, before adding that only “small details” remain to be settled.
After the big win tonight, he talked about how nice the Warriors’environment is and why he wanted to sign with them in the first place.

As for accomplishing anything, Durant said, “I’ve just got to keep getting better. I don’t think I prove — I proved to myself I picked the right career as a kid. I think I’ve got a lot more to go. So I’m just trying to prove to myself that I could just stay in it for the long haul, and hopefully I continue to have some success. Just keep growing as a player. That’s my only concern.”

Love ’em or hate ’em, there is no denying them.

“That’s how you know we’re a great team, is when everybody’s coming after us,” Durant said. “Whether it’s opponents, whether it’s different coaches panning for us, whether it’s the fans, the media that hate us, it feels good when you’re the team that everybody’s gunning for. It makes us better.”

No team is better. They are the champions 2nd year in a row.
Golden State. Golden standard. A team that has changed the way basketball is played.

Overcoming obstacles all season long, the Warriors won their fourth straight finals matchup against Cleveland with a sweep. It was the first sweep in the NBA Finals since 2007, when James was dismissed by a powerful San Antonio team in his first one. His eighth straight appearance didn’t go well either, and now there’s uncertainty where the superstar will play next.
Right now, Golden State is on another tier and with Durant expected to re-sign with them in weeks and Curry, Thompson, Green and the rest still young and hungry, their reign could last much longer.
“We’ve got a lot of three-time, two-time champs in there, and we’ll have plenty of time in our lives to discuss that later,” Curry said. “So want to keep this thing going as long as we can.”

Will the Warriors sweep, or will the Cavaliers live to fight another game?