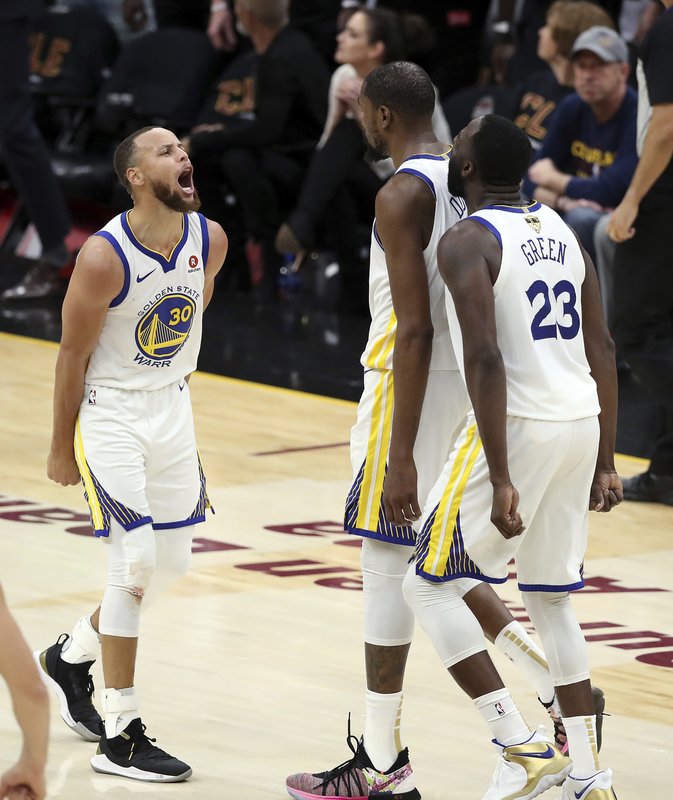 CLEVELAND, Ohio (Diya TV) – Stepping back after a dagger 33-feet 3-pointer with less than a minute left in the game, the ‘assassin’ as LeBron James called him, stood there savoring the moment as his teammates screamed in absolute joy. It was the Kevin Durant show. The Cavaliers setup an effective defense on Steph Curry, double teaming him and while he perhaps had the worst night of this finals series, it was Durant’s night to shine. With 43 points, 13 rebounds and 7 assists the 6’9″ soft-spoken Warrior along with his supporting cast, executed exactly what the Warriors team is known for – Strength in Numbers. Switching the plays from Curry to Durant, Coach Kerr, chalked in yet another victory for his franchise.

Game 3 was the Cavaliers’s big chance to make a comeback, but this loss lifted the Warriors to places hard to reach. A comeback from a 3-0 deficit has never been done in the playoffs. But the Cavaliers have shown before that they can make history, so this series is still far from over.

The Cavaliers came back from a 2-0 deficit in the 2016 NBA Finals to win the Championship in Game 7 and did not allow the Warriors sweep them last year. However this year the Cavaliers have made many changes to their roster, including bringing on point guard George Hill & the aggressive and fierce shooting guard Rodney Hood and these two made their presence known in Game 3, despite the loss.

For the Warriors, with Durant in his second season with Golden State, their team chemistry has only gotten stronger.
“When a guy like Kevin Durant is hitting these shots, it’s a joy to watch. It’s amazing to be a part of,” Klay Thompson said, about Durant’s 3-pointer. This three is similar to the one last Finals in Game 3, one that was also crucial to the win.

The first and second quarter performances by the Cavaliers were extraordinary, they moved the ball and stopped Curry from finding his rhythm. In addition to having a firing offense, led by Kevin Love and J.R. Smith, they were able to maintain some good defense and keep a double-digit lead for part of the game. Tyronn Lue said, “I thought we played a good first half. They’re going to make runs. That’s what this team does. To be up 6 at the half after being up 13 in that first half, but they’re going to make runs.” Lue decided to play Rodney Hood last night, after benching him for most of the Celtics series. Hood’s 15 points gave himself and the Cavaliers new life, creating offense where there was none.

Stephen Curry was 3-16 from the field, with only 11 points, a rare performance for this all star. Klay Thompson wasn’t able to score much either, with just 10 points. However, Shaun Livingston, Andre Iguodala, JaVale McGee, and Jordan Bell pitched in. Shaun Livingston has only missed 1 field goal this entire series, pitching in 8 points. Iguodala, although not 100%, showed championship experience and grit with 8 points and a plus of 14. Coach Kerr said, “Andre was really good. He gave us much-needed minutes.” McGee racked in 10 points in 14 minutes and Bell had 10 points in 12 minutes.
Its that kind of team performance that has been the Warriors key to success.

Game 3 uncovered a few historic moments in the NBA. Durant, with his notable performance, finished with a career-best in a playoff game and the third-highest point total in Warriors history in the Finals. He also, Durant surpassed veterans Wilt Chamberlain and Elgin Baylor on the NBA’s all-time postseason points list, at 17th place with a total of 3,636 points. He has maintained his streak of scoring 25 or more points in his first 13 Finals games.
This has only been matched by Shaquille O’Neal (first 20) and Michael Jordan (first 21).

Draymond Green passed Wilt Chamberlain and became the leader of most rebounds in the postseason for Golden State.
He also made franchise history, with his 100th playoff game, the 2nd Warrior to join Klay Thompson in this record.

Despite the loss, James had his 10th triple-double in the Finals, extending his personal record. He is climbing up the Finals’ leaderboards, coming in second in the all-time steals and points, third in assists, and fifth in rebounds.
He recorded his 110th playoff game with 30 or more points, passing Michael Jordon (109) for the most in NBA postseason. He also logged his 10,000th playoff minute during tonight’s game, becoming the first player in NBA history to do so.

Game 4 A Sweep or a Bloody Fight?

The Warriors have maintained they know the Cavaliers are no easy task and taking it for granted was never an option. The Warriors should have lost Game 1 had it not been for the unbelievable error by JR Smith, so the greatness of this opportunity to sweep, is not lost on them. “It’s just going to be …it’s a trap game. You let your guard down. You show up thinking that we’re going to show up and win, right? Start making preparations for celebrations. You can’t do that. You have to go against the grain.”, said Shaun Livingston

And given how critical Game 4 is for the Cavaliers, Curry reminded everyone, “Understanding that Game 4 is going to be the toughest game that we’ve played in the series, to close it out. We’re going to need energy, effort, focus from every
guy that steps foot on the floor for 48 minutes.”

For the Cavaliers, this is do or die, on home court. There is no way they will allow the Warriors to sweep them in Cleveland and spray champagne in their locker rooms. Earlier today JR Smith said, “Just know that our backs are up against the wall and if we don’t win, it’s over. So if that’s not enough motivation for you, I don’t know what is. It’s The Finals, and we’ve got to come out and play the way we know how.”

Kevin love is keenly aware of what it will take, “For us, that margin of error is very small. We know that if we keep our coverages tight; we foul when we need to; we switch when we’re supposed to; we don’t let them slip to the rim, get those easy buckets that are deflating; and then on the offensive end in the third quarter we don’t get stagnant and play a full 48 minutes of moving the ball and playing our game, we’ll give ourselves a chance and we feel like we can win.”

As for James, his message is clear and simple, “You’ve just got to try to hunker down and get stops and try to create a little space.’

It all unfolds Friday night at 9PM Easter/6PM Pacific at the Quicken Loans Arena in Cleveland.