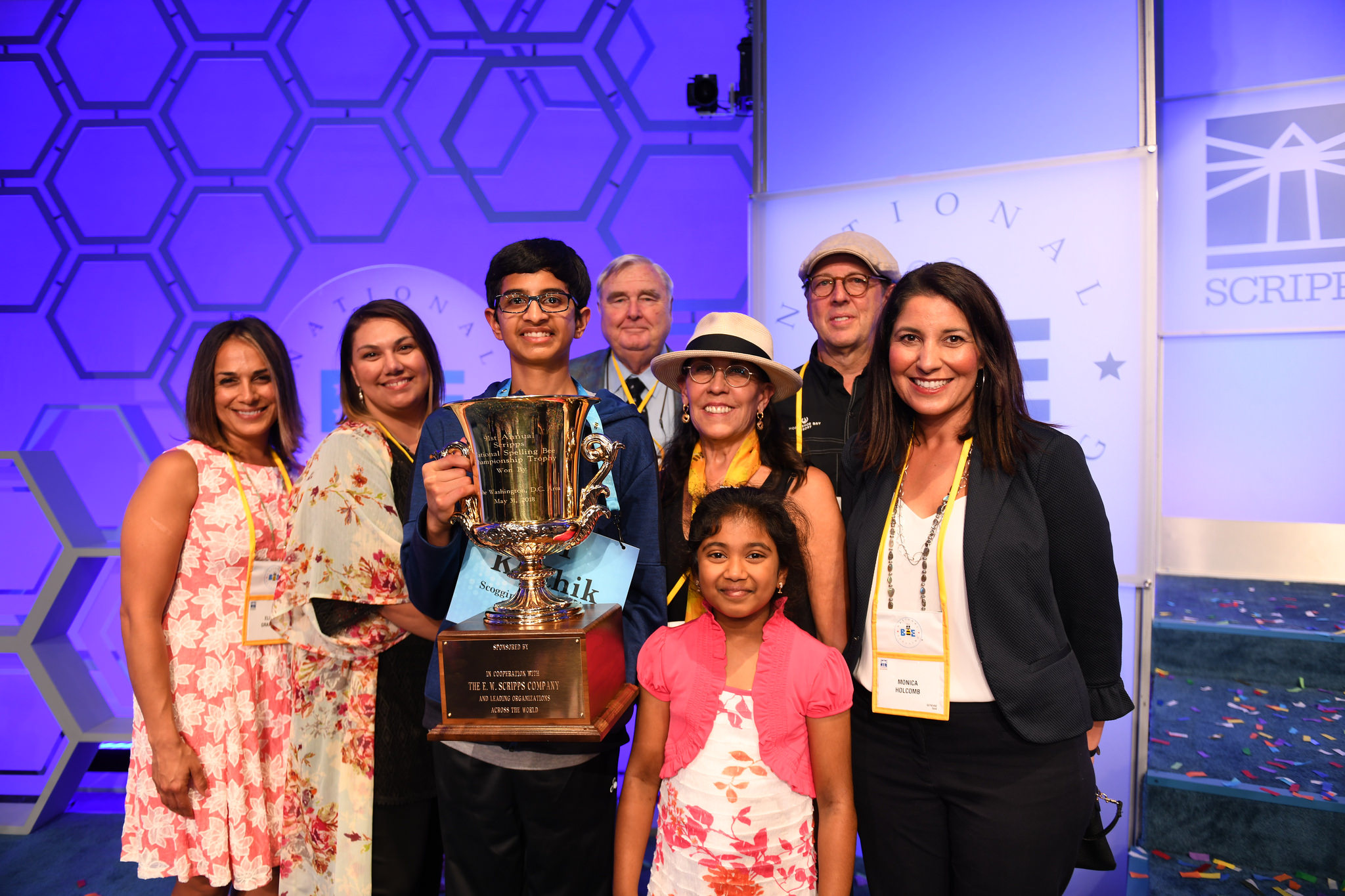 This year, there was a record number of 516 spellers, mostly because of the new wild card program. This program, RSVBee, let 238 spellers into the national bee, especially if they were from very competitive spelling areas, like Dallas, where Nemmani lives. Naysa Modi, a fellow Texan speller, won the county and regional bee and therefore eliminated spellers including Karthik Nemmani and Abhijay Kodali, who ranked third place. In addition to enabling others to qualify, this helped the Spelling Bee diversify the pool of candidates. In total, 855 applicants applied.

When asked about the fact that the wild card contestants had a $750 entry fee, Karthik’s dad, Krishna Nemmani, said, “I don’t care. I know his caliber,”
Karthik’s early life was much like other spellers. His dad said that when he was 3, Karthik arranged block letters to spell horse and won his first spelling bee at the age of 4½ years.

Karthik is from McKinney, Texas — his family moved there specifically so he could go to a school that takes part in the Scripps program. Naysa is from Frisco, less than 15 miles to the west. And third-place finisher Abhijay Kodali lives in Flower Mound, another 40 miles west.

Adam Symson, president and CEO of The E.W. Scripps Company, presented the championship trophy moments before ESPN signed off from the 91st Scripps National Spelling Bee. “Karthik showcased not only broad knowledge of the English language but also incredible poise under pressure,” said Symson. “This is a grueling competition that takes years of preparation and then challenges the participants all week long. Karthik handled it with grace and maturity. The Scripps National Spelling Bee is a national treasure, and we take great pride each year in seeing the inspiration it brings to audiences across the U.S. – and the world.”

“I didn’t really think I’d be able to do it. I had confidence that I could do it, but I honestly didn’t realistically think it could happen,” Nemmani said softly.

As the two Texans remained, Modi misspelled ‘bewusstseinslage,’ and Karthik had to spell two words correctly, including the final word koinonia, to be crowned the 2018 winner.

23 of the 41 finalists were Indian American. The last three standing were all from Texas, a major spelling area, and Indian American hub. The reoccurrence of Indian American champions has received some backlash with disparaging tweets like “we need an American to win this spelling bee #tiredofindians,”

Grace Walters, his 16 year-old coach, is the one Karthik credits for his achievement. She said to TIME Magazine that it was a lot different when she competed. Now, computers enable students to do much more. Karthik also had help from Shobna Dasari, a former competitor, and her younger brother Shourav, who finished fourth in 2017. But most of all, Karthik trained day and night, using excel spreadsheets and vocabulary quizzes.

Nemmani praised the runner-up Modi’s hard work and skill, saying, “She’s a really, really good speller. She deserved the trophy as much as I did. I got lucky.” Although he knew how to spell bewussseinslage, he humbly admitted that he did not know about eight or nine words in the finals.

Nemmani sacrificed tennis, a hobby of his, for the spelling bee. Little did he know that it would result in a championship victory & over $42,000 in prizes.

Naysa, on the other hand, accepted her loss gracefully and let everyone know she would be back.

All in all, every speller worked hard for the Spelling Bee. Nemmani, with help from the new wild card program, was able to take the title and become the 2018 Scripps National Spelling Bee champion.