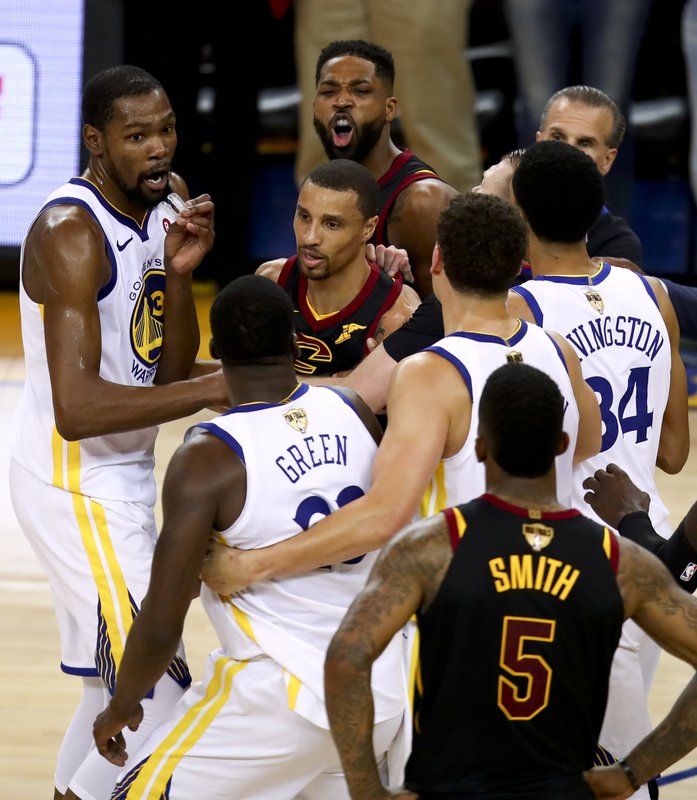 Game 1 of the NBA Finals gets chippy with 2.4 seconds left in OT, An altercation breaks out seconds before the end as Tristan Thompson gets ejected. Photo: AP/Ben Margot

Game 1 of the NBA Finals gets chippy with 2.4 seconds left in OT, An altercation breaks out seconds before the end as Tristan Thompson gets ejected. Photo: AP/Ben Margot

OAKLAND, Calif. (Diya TV) — This is why they play the games.

Game 1 of the NBA Finals did not go as predicted. The Warriors and Cavaliers are meeting once again in the Finals, the first time the same two teams have battled for a championship in four straight years in any of the major American sports leagues. This time, the Warriors are heavily favored to win their 3rd championship in that span. Yet the Cavaliers showed why they were able to overcome the odds and win the Eastern Conference once again.

This year’s edition has a different feel to it, as Kyrie Irving and Andre Iguodala are not featured. Irving was traded to the Celtics by the Cavs in the offseason and Iguodala continues to cope with a knee injury suffered in the Western Conference Finals.

As a result, both teams are adjusting to one another. The Warriors played with an altered small ball lineup. The original had Kevin Durant at small forward, Andre Iguodala at power forward, Draymond Green at center, Stephen Curry at point guard, and Klay Thompson as shooting guard. In the alternative lineup, Durant, Curry, and Thompson did not switch positions. However, Draymond Green acted as a power forward and Kevon Looney as the center.

Both teams felt each other out in the first half, with game tied at 56 at the break after a tremendous long distance three by Stephen Curry to close out the first 24 minutes of action.

The teams were tied seventeen times in this tug-a-war like game, with the Warriors finally breaking away in overtime to win 124-114.

For the Cavaliers, LeBron James scored a playoff career-high 51 points. He got off to a strong start in the first half, with around 24 points, and did not stop in the second half and overtime either.

The Cavaliers had the lead for most of the first half. It got as high as 11 points, but the Warriors were able to reel it in and tie at 56 at half time. The Warriors are known for their 3rd Quarter comebacks, and that continued in Game 1. But the Cavaliers came back in the 4th Quarter.

The Cavaliers were dominant on the boards, especially on the offensive glass. They had nineteen total compared to the Warriors’ four. At the end of the fourth quarter, they drew fouls and were able to push the game into overtime. George Hill missed a game-winning free throw, one that would have locked Game 1 in place for the Cavaliers.

After that, a misunderstanding prevented the Cavaliers from a chance at winning once again. According to Tyronn Lue, J.R. Smith misread the score and thought the Cavaliers were leading by one and therefore dribbled behind the 3-point line.

However, J.R. Smith said that he was expecting a timeout to be called, and did not misread the score at all. LeBron’s reaction to this lead to new memes and other viral cartoons. J.R. Smith commented, “No, I knew we were tied. It’s just, I thought we were going to take a timeout because I got the rebound. I’m pretty sure everybody didn’t think I was going to shoot it over KD right there. … I mean, I saw KD standing right next to me. He already had, what, four blocks? So I wasn’t trying to be the fifth.”

The Warriors dodged a major Klay Thompson injury after J.R. Smith rolling over him in the first quarter. According to Thompson, it’s a minor strained muscle and he’ll be fine for Game 2. After returning in the second quarter, Klay Thompson played for 45 minutes and scored 24 points.

When asked about it, he said that it is an unwritten rule that if you are leading by more than 8-10 points, you don’t take a shot close to the buzzer. Livingston didn’t follow it, and that was unfair. Steve Kerr said that he encourages his players to never try to get a 24-second violation. After the call, there was a lot of reviewing to know if suspensions should be given, but both squads will have their full complement of players minus Iguodala for Game 2.

All in all, Game 1 was better than expected.

To move forward, a little post game assesment is needed.
Warriors coach Steve Kerr’s assessment? “Lucky.”
Cavaliers coach Tyronn Lue’s assessment? “Robbed.”
James wants the Cavs to put it behind them.
“We’ve got to move on,” James said. “This game is over and done with.”

“The Finals, man, anything is liable to happen,” Curry said.

There was a lot of talk about how this series would be a sweep for the Warriors, but with 51 points and if not for the JR Smith gaffe, Lebron James has shown that he isn’t going to let the Warriors breeze through. The Warriors however are well aware of this, they know its going to be a fight.

Both teams are prepared and ready for the next battle. Game 2 tips off on Sunday at 5PM Pacific.

Vivek Ranadive and the Kings take leadership in community building