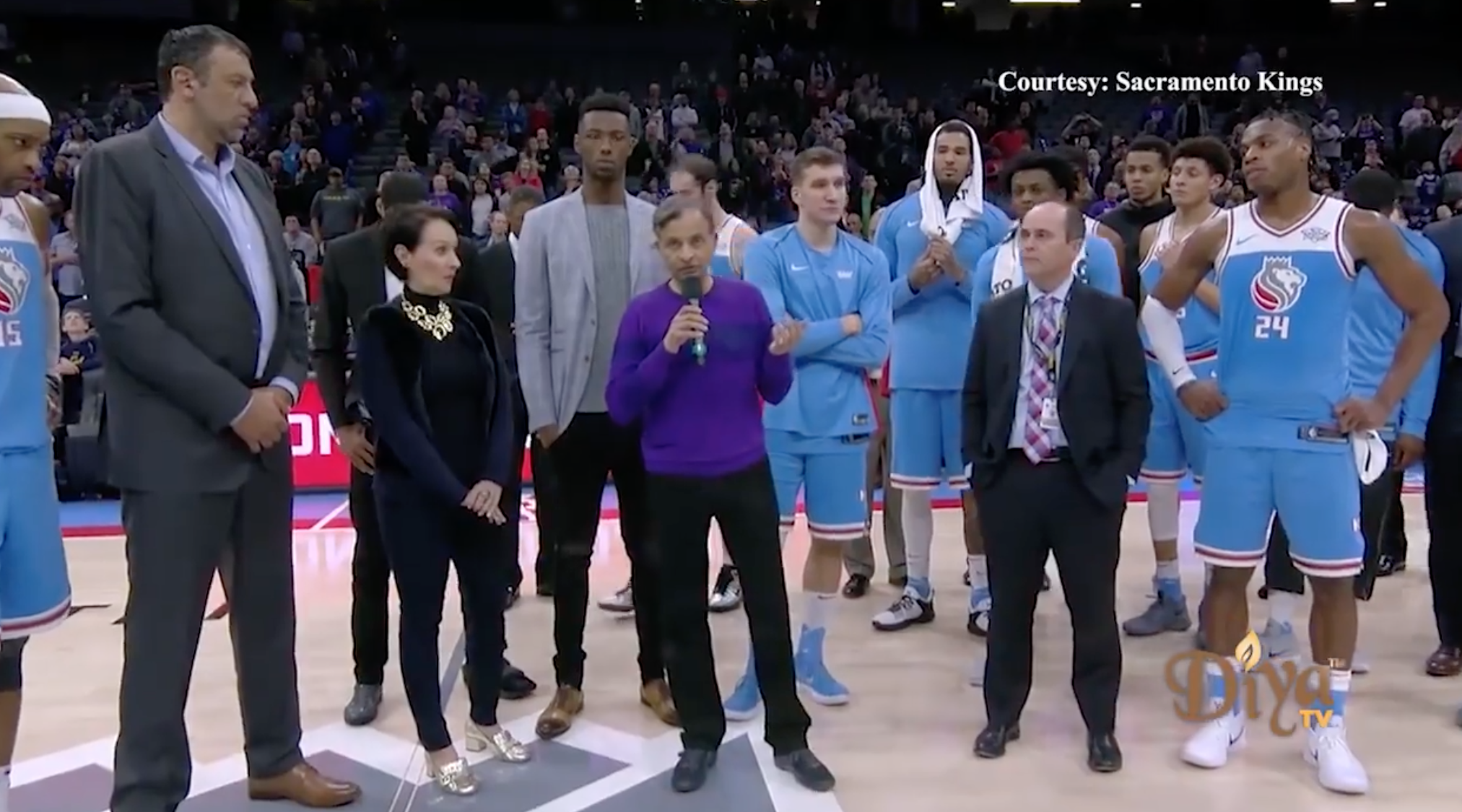 SACRAMENTO, Calif. (Diya TV) — In a rare step for a professional sports franchise, the Sacramento Kings and their majority owner Vivek Ranadive are engaging in the contentious national debate over gun violence and the disproportionate amount of deaths of African-American men at the hands of law enforcement.

“We here at the Kings recognize that we have a big platform. It’s a privilege, but it’s also a responsibility. It’s a responsibility that we take very seriously. We stand here before old, young, black, white, brown and we are all united in our commitment,” said Ranadive.

The Indian-American tech entrepreneur turned NBA franchise owner made those remarks on center court surrounded by his team after the Kings’ sparsely attended matchup with the Atlanta Hawks on March 22nd. The start of the game was delayed by 19 minutes because of protests over the police involved shooting March 18th of 22-year-old Stephon Clark. Thousands of fans were turned away from the arena because of rancor.

Clark was unarmed and holding a cell phone in his hands while in his grandparents’ backyard when he was killed. Of the 20 rounds fired, eight of them hit Clark, primarily in the back, according to an independent autopsy conducted by renowned forensic pathologist Dr. Bennet Omalu.

Sacramento police say the shooting was in self-defense after Clark advanced towards them and ignored their orders to stop. He also had previous run-ins with the law and stood accused that night of breaking into cars.

Ranadive and the Kings are not taking sides, but merely entering the fray has left them vulnerable to criticism at this politically contentious time. Yet that reality has not deterred the team and their owner for being proactive in their support of this grieving community.

The Kings announced an education fund for the children of Stephon Clark and new partnerships with Black Lives Matter Sacramento and the Build.Black. Coalition in an effort to deeply invest in Sacramento’s black youth.

In addition, the NBA community has stood behind Ranadive.

“I was very proud the way the Kings handled it and the way the NBA handled it.
And I thought Vivek’s words afterwords were beautiful,” remarked Golden State Warriors Head Coach Steve Kerr.

Ranadive has shown a unique flare for community building since joining the NBA’s ownership ranks. He introduced Bollywood Night to the association when he was co-owner and Vice Chair of the Golden State Warriors and brought the tradition to Sacramento upon becoming the Kings majority owner. It’s become an event the growing Indian community has come to relish.

“I think Vivek is doing a really good job in the sense of promoting that and saying that hey, there’s opportunities like this to come and share a big stage with many talented people, with the basketball players and what not. So I think it’s a really good opportunity for everybody,” said Preet Chahal of “Dance In You” Academy.

“It’s a special privilege for me to be able to do this. To be able to give a shout out to the country of my birth,” said Ranadive.

In our exclusive interview, Ranadive told us why — as one of the few minority owners in sports — he’s speaking up when few in his position would do so.

While he’s still finding his place in the hyper-competitive NBA, it’s clear this changemaker in the tech world is using his words and deeds to make a lasting mark on the Capitol City.

The 16th annual IFFLA opens with a pensive, ‘In the Shadows’ starring Manoj Bajpayee