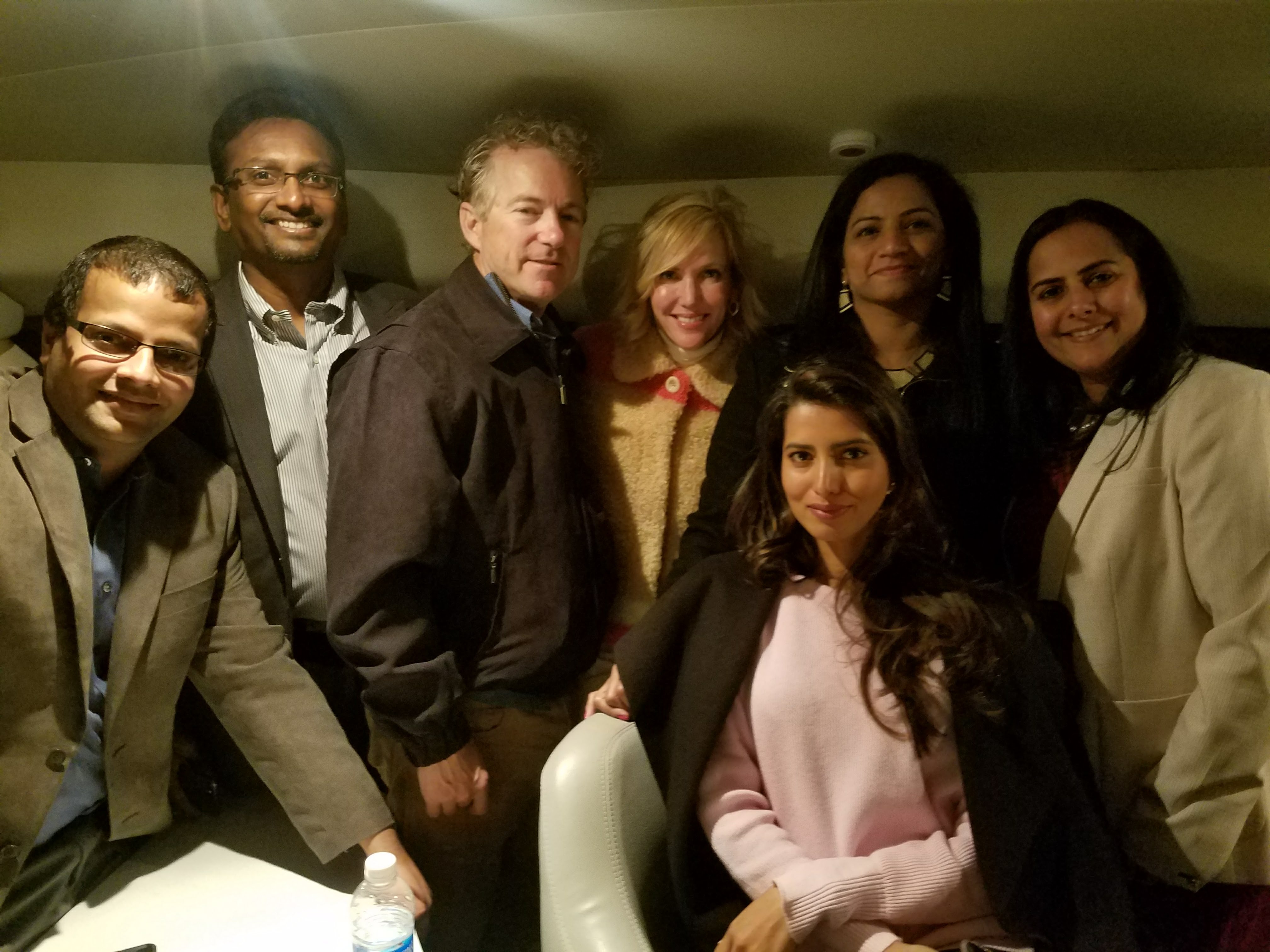 NEWPORT BEACH, Calif. (Diya TV) — In a town hall conference call coordinated by the Republican Hindu Coalition, and at a private reception in Newport Beach, California, U.S. Senator Rand Paul spoke at length about helping those impacted by U.S. immigration law, specifically as it relates to the burgeoning Indian-American community.

Diya TV was invited to exclusively report on this developing story. Paul, who hails from Bowling Green, Kentucky, told RHC supporters he lives in a neighborhood that is largely comprised of “Indian-American physicians who are [his] friends and neighbors.” Yet he was not aware, until overtures from the RHC, “of this problem of the children of people who came here legally being aged out as they get older while their parents are still waiting for their green cards.”

In September 2017, President Donald Trump announced he was ending the program, setting up a deadline for March 5, 2018 unless Congress passes new legislation for DACA recipients, that are often known as ‘Dreamers’ in reference to the proposed DREAM (Development, Relief, and Education for Alien Minors) Act.

With that deadline approaching quickly, DACA recipients are anxious about their future, wondering if they will be able to remain in the U.S. after their DACA status expires. A similar anxiety hovers over folks the RHC refers to as ‘DALCA kids’.

As rhetoric over the issue amplifies, there are few voices advocating for the more than 500,000 Indians in the U.S. who can be waiting for a green card for up to 12 years.

Senator Paul wants to be one of them, imploring RHC supporters “to be more involved” and “ to really inform your legislators.”

In early February, the RHC held a rally outside of the White House attended by a few hundred people to, in their words, ‘fix DALCA, end chain migration and reallocate to skilled based immigration to cut the GC [green card] backlog to two years.’ 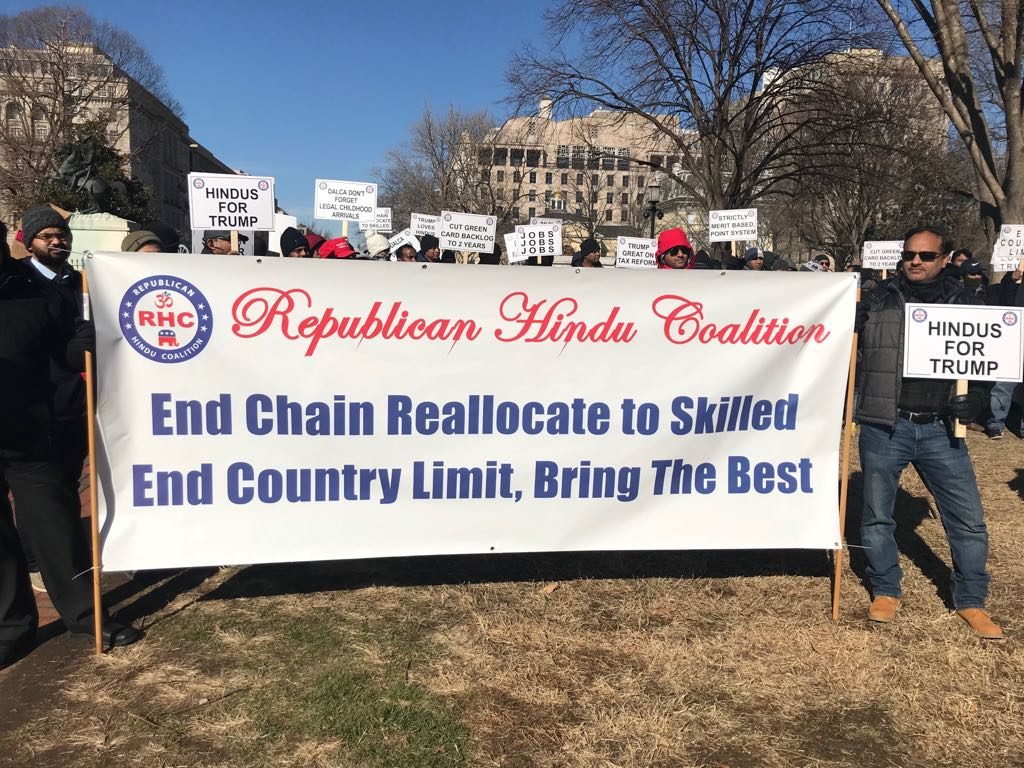 The Coalition, via their website, has begun to embark on a national campaign to spread awareness in the coming weeks for the plight of what they say are at least 200,000 kids in green card limbo.

The question that remains is whether folks on both sides of the aisle will put partisanship aside to help people, that by in large, are in a terrible position through no fault of their own.

“I became aware of this issue more particularly as the Republican Hindu Coalition talked to me about the fact that there were children of legal immigrants who were waiting so long for their green cards that the children became adults and were, like the DACA kids, losing their status in the country. And the answer to me, I think, really is that we need to allow more people who have legal visas to get green cards.

So in the recent battle over immigration, I introduced two amendments. One was specifically to fix the DALCA problem — these are the dependents of legal folks who have come in to this country. And to fix that problem by actually getting rid of the per country limits for employment-based green cards and to phase this in over a few years.

We also introduced another amendment that would have doubled the employment-based visas. These are referred to as EB visas. EB-1 which are professors. EB-2 which is doctors and lawyers. EB-3 which is engineers and teachers. And EB-5 program which is also those who want to bring capital to this country to invest. I’m in favor of all these because I think that we need more legal immigration.

And what I’m worried about in the debate is that it’s all been focused mostly on those who broke the law to come here. And that we are not doing anything to fix the system for those who actually took the time to come legally, get visas approved, and that are waiting and waiting and waiting for green cards. And not enough of the debate has been focused on on those who actually tried to obey the law and use the system correctly.

So I think the debate is just beginning. And my advice to your Coalition is don’t see the current battle as the beginning and the end. See that you need to get involved, and get involved in a big way, because right now the debates is being dominated by the loudest voices. And the loudest voices are those who are marching on Washington, who have come here illegally.

And there’s not enough voices and the voices are not loud enough from those who came legally and want to enhance the system by having more merit-based employment visas. So I am very interested in the issue and want to be helpful with the issue. But I do say to those or that are on the phone call, you need to be more involved and you need to really inform your legislators.

Because I have talked to senators, other senators and other congressmen. Many of them were not aware that, in fact I was not aware, in the beginning of this problem with the children of people who came here legally being aged out as they get older while their parents are still waiting for their green cards. So I think there is a lot that can be done on the issue. And I’m glad to be part of any kind of Coalition that wants to fix it.”

When asked why reforming high-skilled immigration and clearing backlogs is not a priority, by RHC Vice Chair Manasvi, Sen. Paul commented:

I think also people in general, when people talk about merit-based immigration versus the diversity lottery, and having these country caps, I think the more people talk about it, they realize in order to be for merit-based immigration, you have to be for getting rid of these country caps because we have so many Indian-Americans who have come to this community who are, like you say, high skilled, with college degrees and advanced degrees. In my small community, just in Bowling Green, Kentucky, there are many Indian-American physicians who are my friends and neighbors.

And so, I think they add to the community and add to our country. And I think most people once they are aware of that, are sympathetic to trying to fix it. But all of the news print, all of the news media, all of it seems to be directed towards fixing it for people who came here illegally. And I’m not opposed to fixing it for for some of these DACA kids. But I think, at the same time, we should give equal consideration to the DALCA kids, the dependents of those who came here legally.”

When asked by Manasvi what his action plan to resolve this issue would be, Sen. Paul said:

“It’s a long discussion and I’ve been trying over a several year period. Not only do I talk to each of the Senators and Congressmen individually, our staff talks to them and we’ve been advocated for having more employment-based visas for quite awhile. In our bill to do employment-based visas, we doubled the number.

So currently, there’s 10,000 EB-1’s, 10,000 EB-2’s, 10,000 EB-3’s. So there’s about 140,000 of these and we want to double that to be 140,000 new employment-based visas. And so we keep advocating for this because I think it’s also the answer to take the pressure off of, the desire for our country to grow. I think with the recent tax cut, I think there’s going to be a lot of economic growth in our country. And everybody I talk to, successful business owners, says they need more skilled workers and not less.”