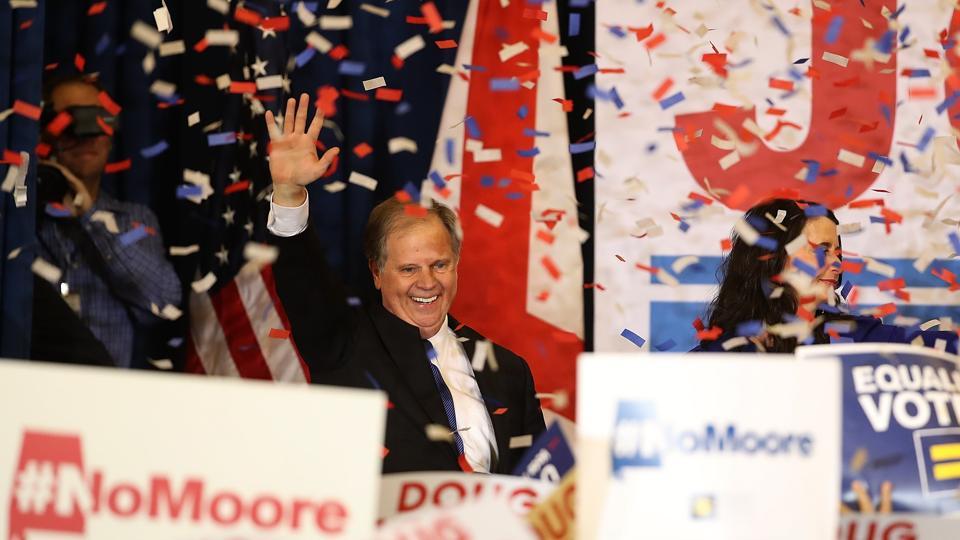 BIRMINGHAM, Ala. — In one of the most intensely fought elections in 2017, Democrat Doug Jones, a former prosecutor has defeated the scandal-clad Republican Roy Moore. Moore who had the endorsement of President Trump, despite allegations of inappropriate sexual behaviour, was defeated on Tuesday in Alabama, a deeply conservative state that last elected a Democratic senator 25 years ago. The upset delivered a surprising victory for the Democrats shaving the Republican Senate majority down to a single seat.

Roy Moore, the Republican candidate who was abandoned by a majority of his own party leaders, lost to Democrat Doug Jones in a battle that wasn’t a battle until the allegations of sexual misconduct began surfacing, including by a woman who was under-age at the time she was allegedly assaulted. Former Presidential candidate Mitt Romney tweeted:

Roy Moore in the US Senate would be a stain on the GOP and on the nation. Leigh Corfman and other victims are courageous heroes. No vote, no majority is worth losing our honor, our integrity.

Moore was running to fill a seat left vacant by Jeff Sessions who is Trump’s attorney general and lost to Jones, a former US attorney who had prosecuted two members of the Ku Klux Klan for a 1963 bombing of a church in which four African Americans girls had been killed.
Just hours before the polls opened President Trump tweeted:

The people of Alabama will do the right thing. Doug Jones is Pro-Abortion, weak on Crime, Military and Illegal Immigration, Bad for Gun Owners and Veterans and against the WALL. Jones is a Pelosi/Schumer Puppet. Roy Moore will always vote with us. VOTE ROY MOORE!

But despite the presidential endorsement, Moore was defeated by Jones becoming the first Democrat Alabama has sent to the US senate since 1992. His upset victory owes much to Moore’s flawed candidacy, but was pulled off by the Democratic party machine that poured money and resources sensing a chance, howsoever small at the time, of victory. Including a helping hand from Alabama-native and former NBA star Charles Barkley, who campaigned for Doug Jones. He told CNN “Roy Moore was an embarrassment. I am just so proud of my state. We’ve got some amazing people here and they rose up today”

President Trump congratulated Jones on his victory, over twitter:

Congratulations to Doug Jones on a hard fought victory. The write-in votes played a very big factor, but a win is a win. The people of Alabama are great, and the Republicans will have another shot at this seat in a very short period of time. It never ends!

After initially holding back his endorsement, Trump had come to fully embrace Moore, arguing that if the allegations were proven, the Republican candidate should step aside. But he needed every vote in the Senate to push through legislative agenda, which has had a patchy run thus far.

Trump broke with most members of his party, including the senior Republican senator from Alabama Richard Shelby who had announced they would not vote for Moore. Jeff Flake, a Republican senator from Arizona, public announced he had donated to Doug Jones’ campaign. Roy Moore hasn’t conceded to Jones and has asked for a recount stating, “It’s not over. I demand a recount. We need to wait for God.”

EXCLUSIVE: Preet Bharara gives the backstory on his firing by President Trump