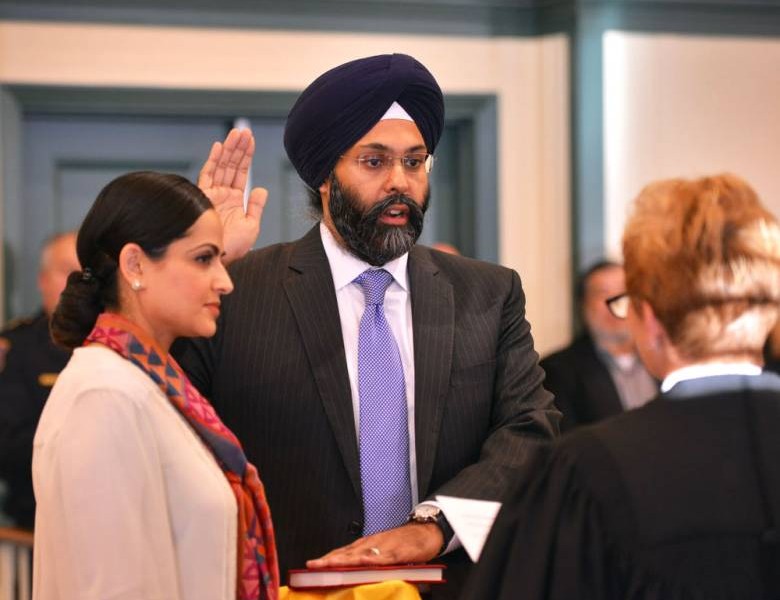 The pick of Grewal, an Indian-American Sikh, could prove historic. If Grewal is confirmed by the state Senate, which seems all but certain, Murphy said he would become the first South Asian attorney general in New Jersey and the first Sikh to hold the position in any state.

“The American dream is alive and well in New Jersey,” Grewal said at a news conference in Trenton where Murphy made the announcement.

Grewal, a Glen Rock resident and former federal prosecutor, has led the Bergen County Prosecutor’s Office since Republican Gov. Chris Christie tapped him for the role in January 2016. He served in an acting capacity until the Senate confirmed him to a five-year term in November 2016.

Grewal, a Democrat, has earned plaudits for his office’s work in combating the opioid crisis in Bergen County and promoting better relations between police and the people they serve.

The South Asian Bar Association of North America (SABA) congratulated Gurbir S. Grewal.
“The decision to appoint a visible minority as the chief law enforcement officer for New Jersey reflects the diversity of the state and of the US, and is especially important in a time where minorities and immigrants have often felt targeted by law enforcement,” said SABA President Rishi Bagga. “We applaud Governor-elect Murphy in picking a distinguished and qualified member of the South Asian and Sikh American legal community for this pivotal role. We strongly support Mr. Grewal’s nomination as Attorney General and look forward to working with him on issues of national importance.”

Mr. Grewal has spent most of his legal career in public service, where he is currently the Bergen County prosecutor. Working for most populous county in New Jersey, Grewal serves a community of almost one million with his staff of 265.

Among other initiatives, Grewal has put in place a strategy of persuading recently arrested or hospitalized addicts to immediately talk to addiction recovery specialists. That has led to nearly three-quarters of those addicts agreeing to enter treatment at some point.

Attorney general is one of the most powerful positions in New Jersey government, serving as the state’s top cop and top lawyer. The person in that role leads the 7,200-employee Department of Law and Public Safety, which includes the State Police, civil rights enforcement, consumer affairs and civil litigation.

Grewal’s confirmation would be the second notable accomplishment for New Jersey Sikhs in recent months. Earlier this year, Ravi Bhalla was elected mayor of Hoboken and will become the first Sikh to hold that office in New Jersey.