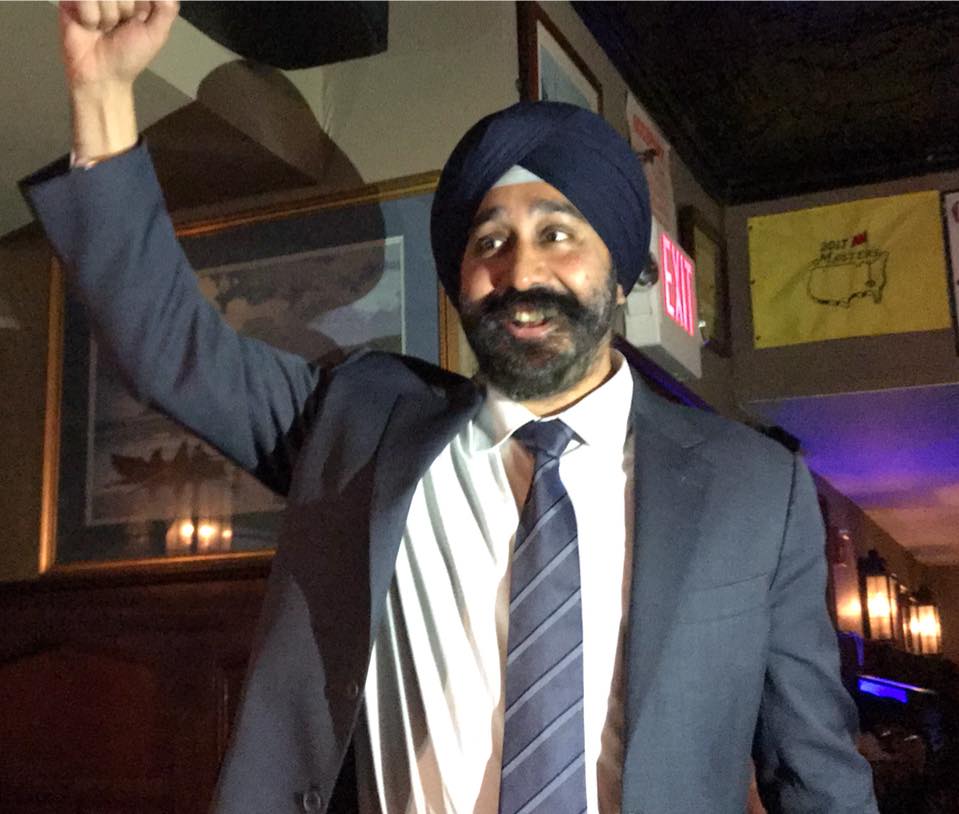 HOBOKEN, NJ (Diya TV) — Two term Hoboken City council member Ravi Bhalla became the first turbaned Sikh to be elected mayor of the city of Hoboken, New Jersey. Tuesday night, Bhalla was all smiles, thrusting his arm in the air to celebrate his victory becoming one of the first Sikh mayors of a U.S. city. Sikh-American lawyer with a record of fighting discrimination, Bhalla says, “I’m everything that Trump hates. A brown man wearing a turban, and a proud American with the know-how to stop his assaults on our country’s values.”

A victory that didn’t come easy. Bhalla ran against five other candidates in Hoboken, a city of 50,000. The Saturday before election, Bhalla tweeted that the fliers about terrorism were “troubling, but we won’t let hate win.” CBS News reported that the fliers did not name the group that paid for them, a violation of state election law.

Yesterday, a flyer w/ word “terrorist” above a pic of me was circulated in Hob. Of course this is troubling, but we won’t let hate win. pic.twitter.com/Ri9xrYF4Al

The community celebrated in part disbelief and part joy.

Despite the racist flyering campaign, #RaviBhalla has been elected the first Sikh mayor of Hoboken.

Simran Jeet Singh, a friend and support of Bhalla and a fellow turbaned Sikh tweeted in disbelief

is this real life?
"New Jersey elects its first Sikh mayor in history."https://t.co/iOjE6yTPpR

“Given how much we’ve endured in this country, and frankly the fact that we have been here for more than a century now in the U.S. and have felt largely ignored and neglected as a minority community, this is for us a signal shift, where we feel like we’re getting on the map. This is a major development for us,” Simran Jeet Singh, a religion fellow at the Sikh Coalition, said. “And it comes in a context where, like many minority groups, we’re facing xenophobia.”

Gurwin Ahuja, executive director of the National Sikh Campaign, said Bhalla is one of the first Sikh people to become mayor of a U.S. city. Satyendra Huja served as mayor of the city of Charlottesville, and some small towns have had Sikh mayors.

Ahuja said that whoever made the fliers implying that “turban” meant “terrorist” interpreted the turban completely wrong. “Sikhs are instructed to be actively involved in their communities…. In fact, the reason why Sikhs wear a turban is because it represents our value of equality and to stand up against injustice wherever we see it,” he said. “The turban represents our commitment to those values of equality — gender equality, racial equality and religious tolerance — and our duty to stand up for those rights. In India, back in the day, when people would see a Sikh, they knew that was someone they could go to for safety.”

Bhalla, finished first among six candidates in the winner take all race, with 4,781 votes with around 34% of votes. DeFusco totaled 4,116 votes, or approximately 29 percent, according to Hudson County Clerk election results, which do no include mail-in and provisional ballots.