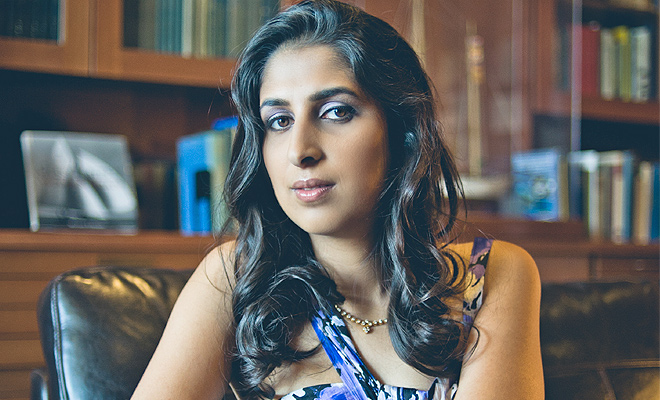 Surbhi Sarna was named the recipient of the 2017 Distinguished Alumni Award by Harker School’s Office of Alumni Relations.

She was honored at homecoming on Sept. 23. Sarna is a 2003 graduate of the San Jose, CA private school.

The Distinguished Alumni Award “recognizes a prominent alumna/alumnus who exemplifies the very best of Harker, whose contributions have led to extraordinary advances that benefit the greater good, who gives back to his or her community and to Harker, and who inspires others by his or her professional leadership and commitment.”

According to a news release from Harker, “Sarna has dedicated her career to using STEM research to improve health care for women. Her personal medical challenges in her early teen years left her determined to create better conditions in the field of female health.”

Sarna studied molecular and cell biology at UC Berkeley, and worked as a clinical scientist at the Stanford University School of Medicine.

After graduating from Berkeley in 2007 with a BS in mechanical engineering, she worked as an engineer for medical-device companies Abbott Vascular and BioCardia.

According to her nVision bio, as a teenager, she suffered from intense pelvic pain caused by what turned out to be an ovarian cyst. “Realizing how patients and clinicians often lacked definitive diagnostic tools to make informed decisions, she set out to bring such innovation to the field.  After spending a decade building and leading teams and taking medical devices from concept to market, Ms. Sarna founded nVision in 2011, driven by her passion to fill the void in women’s health.”

Following a successful clinical trial, the company received FDA approval for its device in November 2015.

She is an inventor on a dozen patents and has been recognized as a leading healthcare entrepreneur by Forbes, Entrepreneur Magazine, TEDMED, and Bloomberg.

Sarna has been a keynote speaker at Harker’s annual Research Symposium. She was named to Forbes’ prestigious “30 Under 30” list of young movers and shakers in the fields of science and health care.

The Harker School is a private Silicon Valley school that has earned international recognition. Founded in 1893, Harker is the largest independent school of its kind in California, serving preschool, elementary, middle and high school-aged children at four San Jose campuses.

Ajit Pai confirmed by Senate for second term at FCC