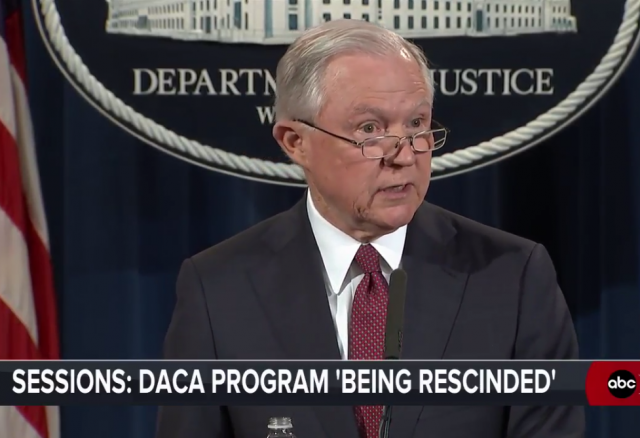 Attorney General Jeff Sessions Announces DACA is Being Rescinded by the Trump administration.

WASHINGTON (Diya TV) — Following up on one of his campaign promises, President Trump rescinded DACA (Deferred Action for Childhood Arrivals), ceasing the program that protects nearly 800,000 undocumented immigrants from deportation. Among those affected include approximately 7,000 Indian-American immigrants.

Attorney General Jeff Sessions made the announcement on Sept. 5, claiming DACA-eligible individuals are “lawbreakers who adversely impacted the wages and employment of native-born Americans.” Sessions says implementation will be suspended for six months and DACA permits that expire during the next six months will continue to be renewed.

According to U.S. Citizenship and Immigration Services data, India ranks 11th among countries of origin in DACA students.

The Hindu American Foundation (HAF) issued a statement on Sept. 6. “The termination highlights the need for Congress to stop delaying immigration reforms that serve our country’s needs, and better reflect our country’s values as a nation of immigrants,” said Suhag Shukla, the Foundation’s Executive Director. “A sign of a broken system can’t get more obvious than when an order must serve as a last resort to deliver a dream or when it’s used to jeopardize the immigration status of hundreds of thousands of young people, including thousands of Indian, South Asian, and diaspora Hindus, who have grown up, studied, and worked here.”

The non-profit organization also called upon Congress for :swift passage of compassionate and comprehensive immigration reform” and called the termination of the DACA program by Trump unnecessarily punitive.

California Assembly member Ro Khanna issued a statement supporting DREAMers: “Since 2012, nearly 800,000 young people who immigrated to this country have had the opportunity to go to school, gain employment, and continue on with their lives minus the fear of deportation. Today, the Trump Administration once again shows it has no dignity for our friends, neighbors, and colleagues. We must safeguard the livelihood of DREAMers and provide these inspiring young people and their courageous parents a pathway to citizenship.”

Kamala Harris, a Democratic junior Senator representing California also issued a lengthy statement: “This decision undermines our nation’s values and is a betrayal to the DACA recipients who make our nation strong and represent the best of us … We promised these more than 800,000 young people — including 200,000 in California — that if they came out of the shadows that they could become lawful, productive members of our society. Trump’s decision to shamefully break this promise and turn his back on the Dreamers just shows he is once again on the side of division and hate.”

President Obama criticized Trump’s action with a lengthy facebook post: “Immigration can be a controversial topic. We all want safe, secure borders and a dynamic economy, and people of goodwill can have legitimate disagreements about how to fix our immigration system so that everybody plays by the rules … But that’s not what the action that the White House took today is about … What makes us American is our fidelity to a set of ideals – that all of us are created equal; that all of us deserve the chance to make of our lives what we will; that all of us share an obligation to stand up, speak out, and secure our most cherished values for the next generation. That’s how America has traveled this far. That’s how, if we keep at it, we will ultimately reach that more perfect union.” 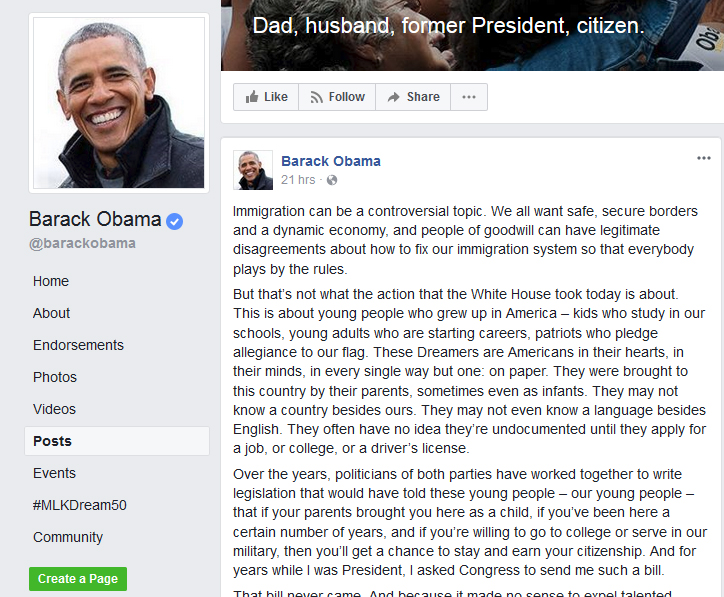 “President Obama’s DACA program was a clear abuse of executive authority, an attempt to create law out of thin air. Congress writes laws, not the president, and ending this program fulfills a promise that President Donald J. Trump made to restore the proper role of the executive and legislative branches. Now, the House and Senate, with the president’s leadership, will work to find consensus on a permanent legislative solution on this and many immigration issues, such as border security and interior enforcement,” said Ryan on Facebook. 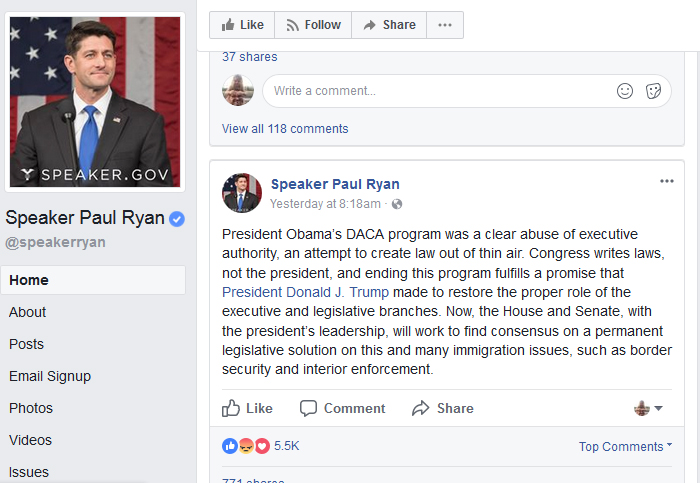 Founded by Obama in 2012, DACA allows certain illegal immigrants who entered the country as minors to receive a renewable two-year period of deferred action from deportation and eligibility for a work permit. Applicants must partake in a rigorous screening process.
Some information for this report courtesy of The Washington Post.
Related Topics:Barack ObamaDACADonald TrumpDream ActimmigrationPaul RyanPresident Donald Trumpstudents
Up Next