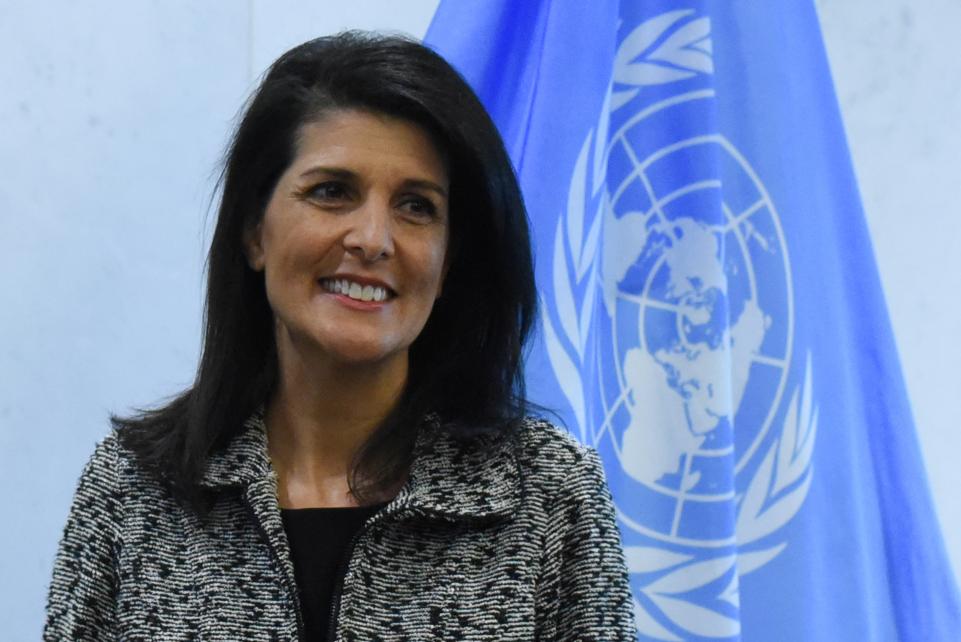 U.S. ambassador to the UN spoke with MSNBC’s Nicole Wallace and addressed the Article 5 conflict of President Trump’s recent remarks delivered to European members of NATO.

Haley’s remarks were delivered on the heels of President Donald Trump’s contentious speech delivered to European members of NATO, during which he declined to explicitly affirm his commitment to Article 5, an agreement which binds member countries to the collective defense of the alliance.

Wallace asked Haley “how the president’s reluctance to affirm our commitment to all for one, one for all at the NATO summit” affects Haley’s job of “shoulder to shoulder diplomacy.”

“Article 5 is something that we have always supported,” Haley said in response.

“Do you support it today?” Wallace asked in response.

When asked why President Trump didn’t outright state that during his address to NATO members, Haley responding in saying “there’s a lot of things he didn’t say, and I think people are nitpicking at what he did say.”

Haley added that she thought Trump’s trip was a productive one, contrary to the reports of German chancellor Angela Merkel’s cold-shouldering of the current administration, “Germany will see in time that we have the backs of our allies,” she said.

See video of the interview below:

KASHMIR, India (Diya TV)  — New military clashes between Pakistan and India along the Kashmir border left several casualties on both sides. The Pakistani army confirmed the killing of two of its soldiers along the Line of Control (LoC) that divides Kashmir. The Indian military confirmed the death of one of its officers and a civilian. Both sides allege the conflict was started by the other.

Raag Singhal, an Indian American circuit court judge in Broward County, Florida, was confirmed by the U.S. Senate and will officially become a U.S. District Court judge in South Florida. It’s a lifetime appointment for Singhal, who will act as a trial judge in federal criminal and civil cases.

FCC chairman Ajit Pai announced Dr. Monisha Ghosh will become the FCC’s Chief Technology Officer, the first woman to serve in that role. Ghosh joins the FCC from the National Science Foundation where she was a program director and the University of Chicago, where she was a research professor.

NANKANA SAHIB, Pakistan (Diya TV)  — Communal tensions are high in Pakistan’s Punjab state after a fiery Muslim mob hurled stones and threatened to destroy the historic Sikh Temple Nankana Sahib Gurdwara, birthplace of Guru Nanak, the founder of Sikhism. Pakistani officials say the situation is under control, and a large police presence is on site. But the men behind the demonstration say their goal is to eradicate Sikhs from the area.

On the order of President Trump, the American military killed Iran’s top military commander, Qassem Soleimani, in a missile strike at Baghdad airport. It’s a dramatic move by the Trump Administration who has been threatening action against Iran for their efforts to impede American operations in the Middle East. Iran’s President Rouhani said in reaction ‘we will take revenge’ and their foreign minister said “America’s action without any doubt is an act of state terrorism.” Democrats are up in arms at the move by Trump without Congressional approval. Trump responded by saying “We took action last night to stop a war. We did not take action to start a war.”

NEW DELHI (Diya TV)  — The war of words over Kashmir heated up when India’s new Army Chief General Manoj Mukund Naravane said India reserves the right to “preemptively strike” at sources of terror along the Line of Control. Pakistan rejected the statement, saying they would thwart any Indian move.

The only Latino in the Democratic field, Julian Castro, is dropping out of the Presidential race suffering from poor support and a lack of funds to continue in earnest.

Manu Asthana begins the New Year as PJM Interconnection’s President and CEO, a nearly 100 year old power infrastructure business that serves 65 million Americans. But his hiring is not without criticism from consumer watchdogs over Asthana’s previous role as President of Direct Energy Home, accusing him of mismanagement. PJM defended their new hire saying those charges are “misleading” and “unfair.”

Pakistan announced their first batch of fighter jets manufactured with China is ready, celebrating with a group of Pakistani and Chinese officials on hand. The two nations also have a deal for commercial aircraft as well.