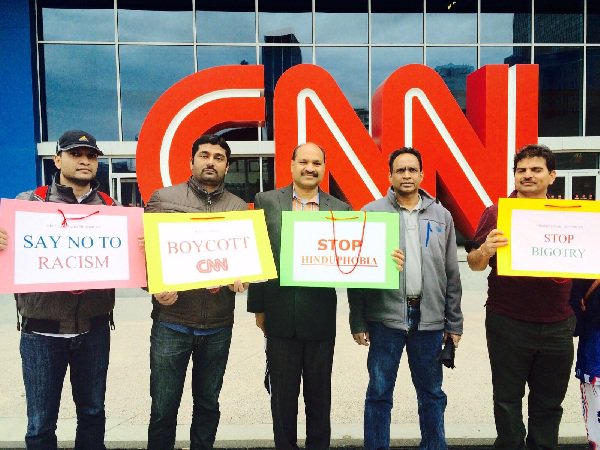 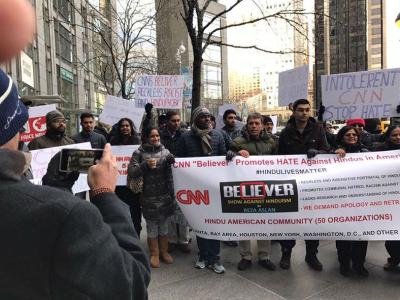 CHICAGO (Diya TV) — The show aired March 5th, yet Several Indian-Americans have continued to protest and raise their concerns over CNN’s show Believer hosted by religion scholar Reza Aslan. And if you are wondering why is this still a matter of contention, the issue many Indian Americans say is about responsibility.

Earlier this weekend, several Indian Americans descended upon CNN’s Chicago headquarters over the weekend to protest the network’s new series, Believer, which they believe is a negative introduction to Hinduism. The show focused on a fringe sect of Hinduism called the ‘Aghoris’ and while many understand and agree the ‘Aghoris’  do not represent the mainstream Hindu community, many believe the show has portrayed Hinduism in a bad light.

The initial outrage sparked comments from lawmakers and prominent Hindu Americans on both the Democratic and Republican sides.

Aslan has free speech! But sad he has made a career of sensationalism over scholarship re: Christianity & Hinduism. https://t.co/JuSp5K5LVz

The Hindu American Foundation released a statement showing deep concerns over the timing and the insensitivity on part of the network.

“Religious literacy in the United States about Hinduism, as every Hindu American knows, is woefully inadequate. The Pew Religious Knowledge Survey of 2013 found that only 36% of Americans could answer a single question about Hinduism: Whether Shiva and Vishnu were deities associated with Hinduism. When the knowledge deficit is so stark, and minority communities are facing a rise in hate incidents across the US— a Hindu American was killed and Sikh American was shot in likely hate crimes in the past week — why would Aslan and CNN sensationalize the Aghoris as a primetime introduction to the faith of a billion Hindus, most of whom have never seen or met an Aghori?” – Samir Kalra, HAF

Supporters showed up in the hundreds for the event, where circulated letters said CNN were responsible for showcasing the grotesque and chilling traditions of one group of people, not the Hindu religion. “The grotesque practices of five individuals have nothing to do with Hinduism, they are not part of any Hindu scriptures or Hindu teachings,” said Bharat Barai, a resident of Chicago.

Hindu-American groups from across the country have held protests against the network since the March 5 airing of the episode. Events have since been held in New York, Houston, Atlanta, San Francisco and the nation’s capital. This weekend’s event had the largest turnout of any of the previous.

Vamsee Juluri, an Indian-American professor of media studies at the University of San Francisco wrote a blog on Huffington Post calling out CNN

“It is unbelievably callous and reckless of CNN to be pushing sensational and grotesque images of bearded brown men and their morbid and deathly religion at a time when the United States is living through a period of unprecedented concern and fear,” Juluri wrote.

In a statement, USINPAC Chairman Sanjay Puri said, “In a charged environment a show like this can create a perception about Indian Americans which could make them more vulnerable to further attacks,”

This is a show about the Aghori not Hinduism #believer https://t.co/uwroTHp5Ka

And the Twittersphere shot back

@rezaaslan you are not "revealing" any truth, you are making it much for difficult for hindus to live in this country #believer

Aslan has maintained he wanted to make a show that would entertain, the intention behind “Believer” was to spread awareness and not to sensationalize.

“Our hope is to introduce people to world views and faith communities that may seem a little strange and foreign and even frightening,” he said in an interview with HuffPost. “But after watching me go through the experience of becoming part of these communities they may seem more relatable.”

However many Hindu question how showcasing the Hindu sect of ‘Aghori’ in a manner ‘Believer’ did, is making Hindus or ‘Aghori’ more relatable?