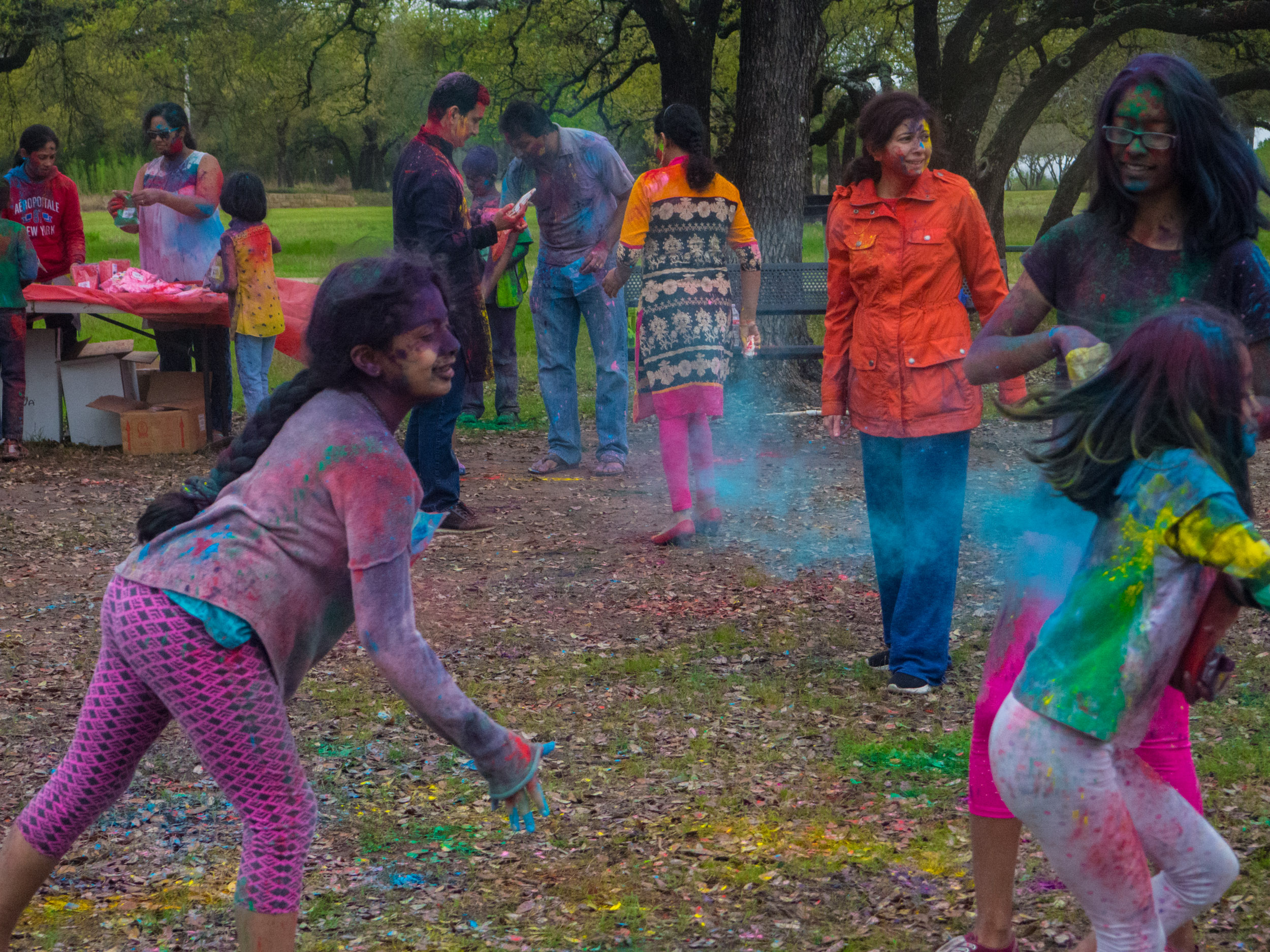 AUSTIN, TX. (Diya TV) — The past few weeks have been sombre for many Indians across the U.S. With increasing incidents of hate crimes, many are getting calls from loved ones in India, checking if it was safe to continue living here. It was then with a sign of hope, that the festival of colors, Holi, announced the arrival of spring. Besides a late winter chill and thunder showers in Austin, thousands came out to play Holi this weekend.

Holi Celebrations across the world!

#WATCH: #Holi celebrations across the world! Including some messages from #Bollywood celebs and the captain of #Indian #cricket team Virat Kohli. #HappyHoli everyone!

The popular Holi at Radha Madhav Dham was like a fun healing retreat to those who attended. Participants were down to a third due to the cold rains. People of all communities came together to dance around each other and throw fistful powdered colors at friends and strangers willing to play. 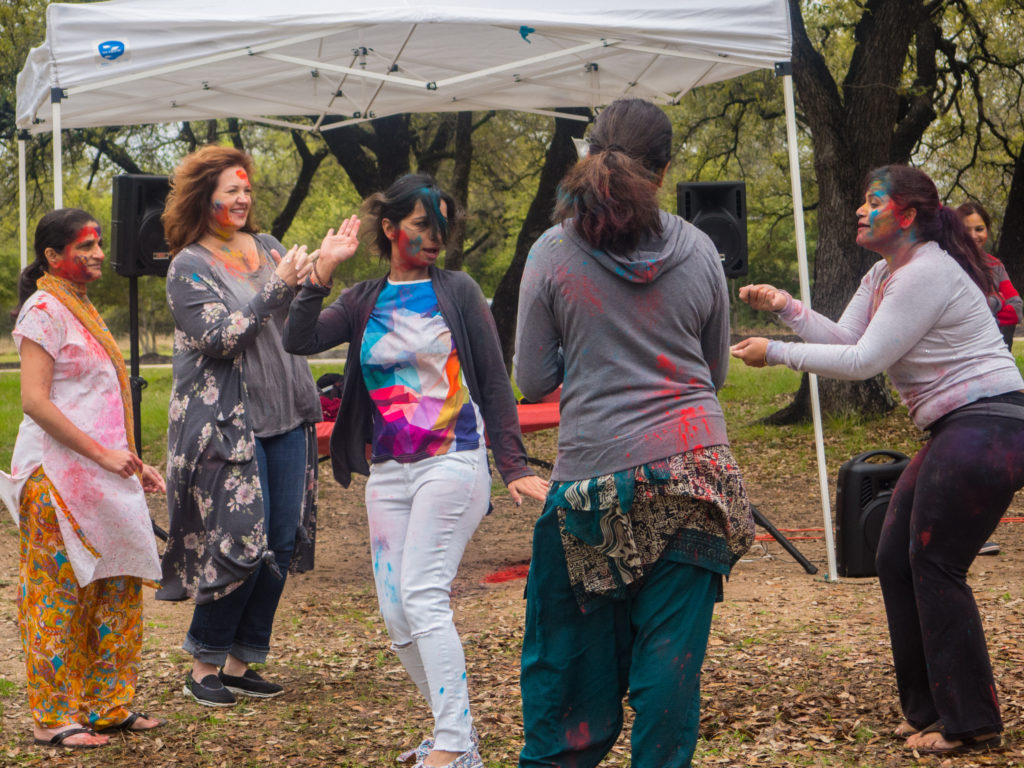 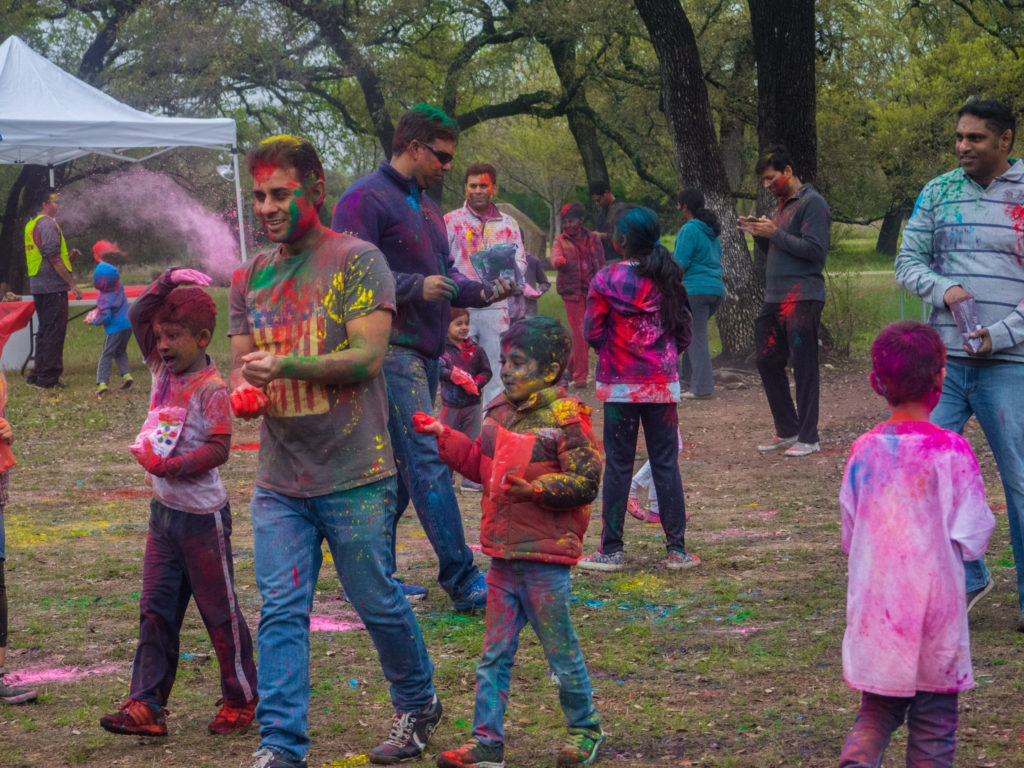 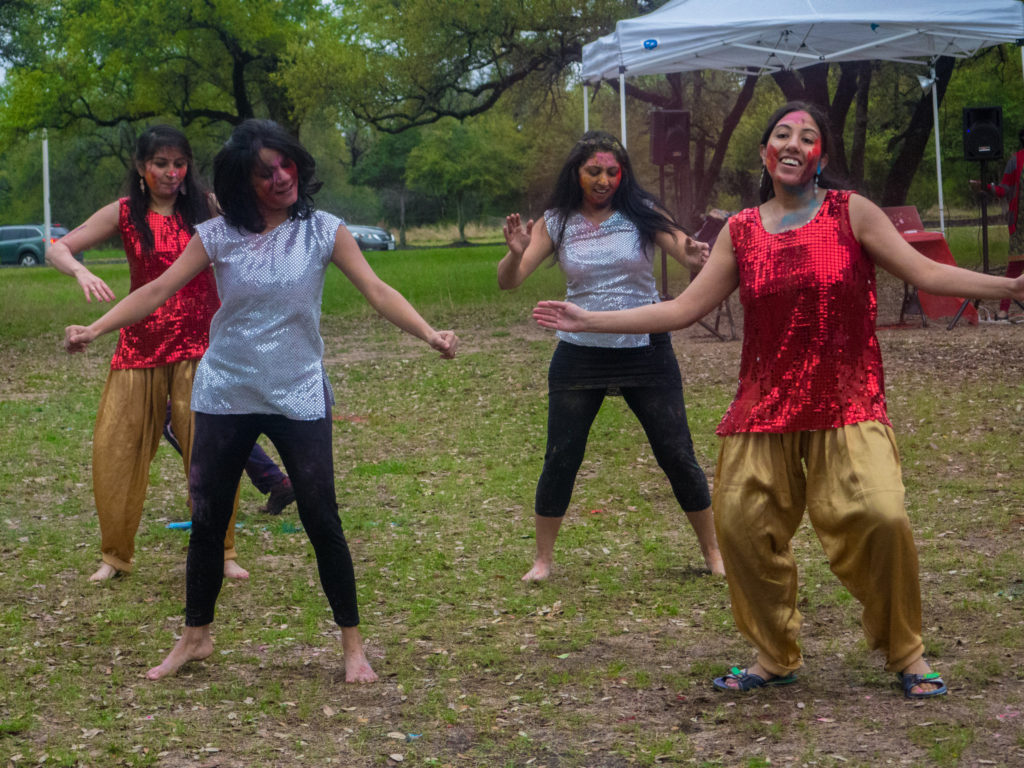 Several other temples and various neighborhoods organized the festivities. There was plenty of Bollywood dance and music. Indian hot chai broke into the cold weather to further raise spirits. No one missed getting drenched with water—another quintessential part of Holi that was replaced by the drizzle.

One of the most beautiful aspects of living in a multi-racial country is the sharing of festivals.People of all races bringing forth so many colors of life. Each festival celebrating the triumph of good over evil—one way or the other. 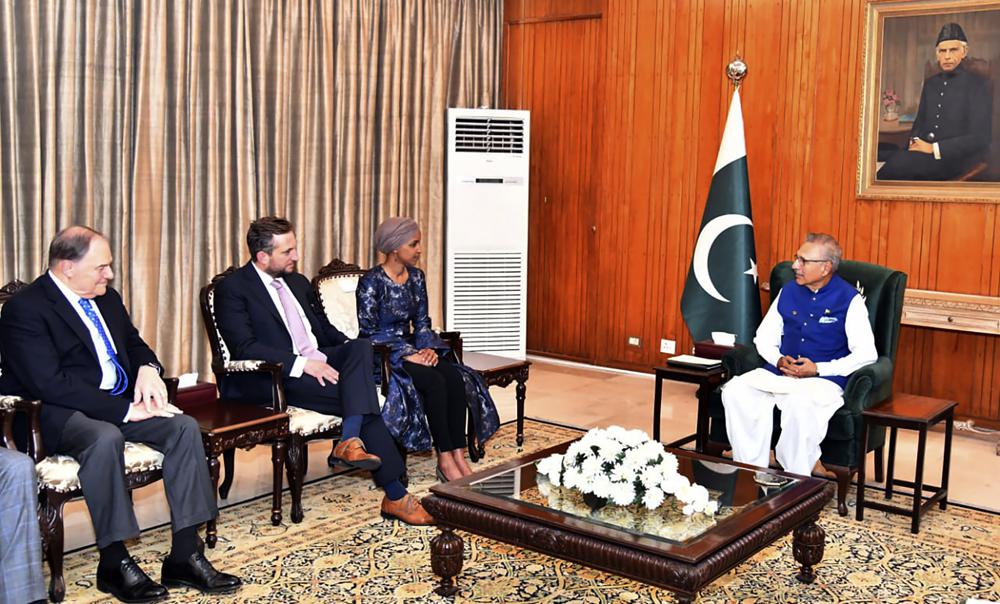 WASHINGTON – Congresswoman Ilhan Omar (D-MN), who visited Pakistan on a non-state department sanctioned visit recently, has pushed along a resolution that would declare India as a country of particular concern in violation of religious freedom. This resolution has been in the works for 3 straight years, but ultimately nothing has materialized. This push forward by Omar represents another call to the Biden administration for India to be designated as a violator of religious freedom. Whether the resolution will go even further along is to be determined.

Recently, Omar visited Pakistan and spoke with high-ranking Pakistani officials, Prime Minister Imran Khan being chief among them. She also has a history of siding with Pakistan in the past, so this resolution does not come as a total surprise.

The details of the resolution go over how India has allegedly targeted Muslims, Christians, Sikhs, and other religious minorities and thus, direct human rights violations. This has been said to be an issue for the past few years as mentioned before, the resolution has been trying to be sent through to the president for 3 consecutive years.

Omar gave insight into why she believes this resolution must be passed along and brought to President Biden’s attention:

“The Indian government must be held responsible for human rights violations against religious and cultural minorities…In recent years, the Indian government has been escalating repressive policies against Muslims, Christians, Sikhs, and Dalits. It is past time for the State Department to acknowledge the reality of the situation in India and formally designate India as a Country of Particular Concern under the International Religious Freedom Act.” 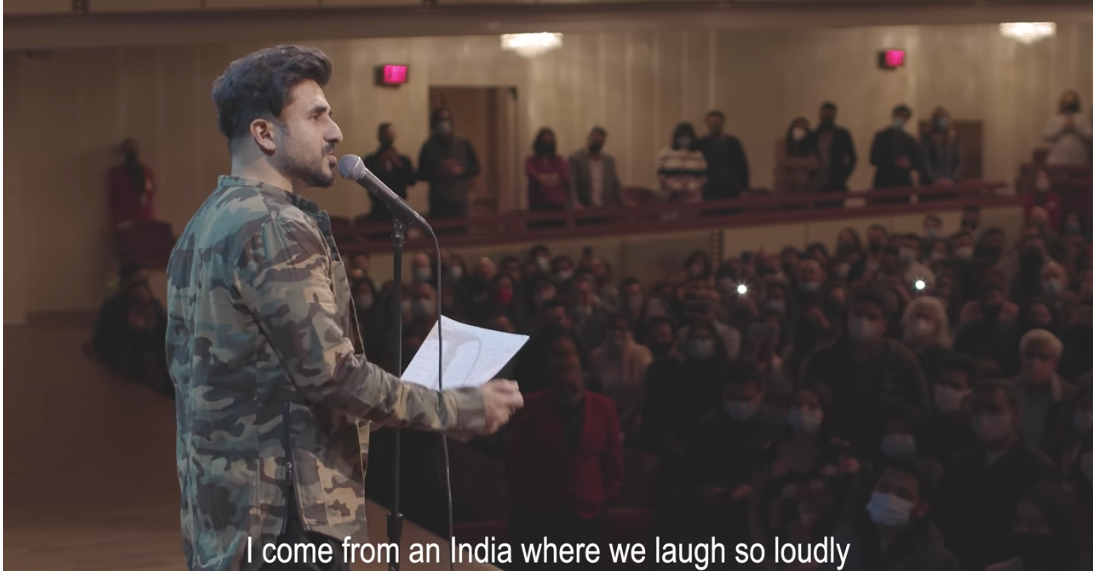 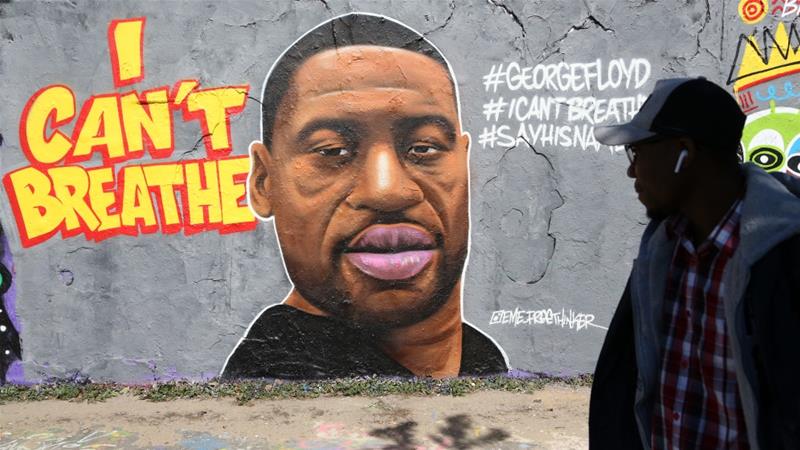 On May 25 , Mr. Floyd was killed in broad daylight by Derek Chauvin, a white police officer with the Minneapolis Police Department (MPD), who kept his knee on Mr. Floyd’s neck for 8 minutes and 46 seconds. Several bystanders who recorded the killing on their phones captured Mr. Floyd repeating, “Please,” “I can’t breath,” and “Don’t kill me.” The three other police officers, Tou Thao, J. Alexander Kueng, and Thomas K. Lane all participated in the arrest and based on videos, did nothing to intervene during Mr. Floyd’s last desperate pleas for help.

Since then, Chauvin has been fired, arrested, and charged with third-degree murder and second-degree manslaughter. Minnesota Attorney General Keith Ellison has been asked by Governor Tim Walz and Mr. Floyd’s family to take over the prosecution of Chauvin’s case; Attorney General Ellison said that he anticipates additional charges for the other officers present when Mr. Floyd was murdered. Additionally, the Federal Bureau of Investigation has opened a federal civil rights investigation into the matter and the Minnesota Bureau of Criminal Apprehension is also investigating possible violations of Minnesota statutes.

In the week since, the Sikh Coalition has joined demands for a completely thorough and transparent investigation into the police misconduct involved in the death of Mr. Floyd and signed onto calls for new federal legislation to increase transparency and thwart police abuse. We also echo the anger felt by millions of Americans across the nation.

Systemic anti-Black racism within law enforcement and throughout the United States contributes directly to the deaths of unarmed Black people. This deadly problem has to change and the Sikh community must stand in unequivocal solidarity with Black Americans in our shared struggle to combat bigotry, racism, and hate.

The Black community has led the civil rights movement and paved the path for all minorities in this country, including Sikh Americans. We must continue to support efforts to ensure justice, including ongoing demands for complete transparency and accountability in the murder of George Floyd and countless others who have been killed as a result of police brutality. We must address the anti-Black sentiments within our own community by vocalizing that Black Lives Matter. We must stand and act in solidarity. Here is a guide on how to be an ally.

There are a myriad of exceptional frontline organizations you can support and actions that you can take to specifically demand justice and show solidarity in response to George Floyd’s case. For more information on some of those organizations or direct action initiatives, click here.

As always, the Sikh Coalition urges you to practice your faith fearlessly.