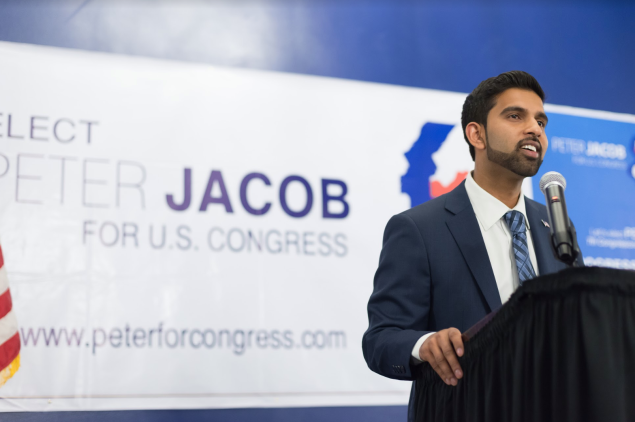 Some experts are already calling the race in N.J.’s 7th district for incumbent Leonard Lance. Newcomer Peter Jacob’s campaign has suffered from a lack of interest and resources from Democratic committees.

UNION, N.J. (Diya TV) — Authorities are investigating two reports of spray-painted swastikas being found at the New Jersey home of a congressional candidate.

Indian-American Democrat Peter Jacob says the swastikas were found outside his family’s Union home on Friday and Monday.

Jacob is seeking election in the 7th District House seat held by Republican Leonard Lance. The Lance campaign has condemned the incidents and said the display of symbols like the swastika is “abhorrent.” Jacob and his family have lived at the home for six years without incident, he calls it an example of the “ever increasing atmosphere of accepted racism” in the country.

He says its now happened twice – swastikas scrawled in orange, first on the sidewalk and then at his home in Union.

“It’s very upsetting,” Jacob said. “It’s very saddening for us to see this.”

The Indian-American’s opponent, Lance, is a documented supporter of Republican presidential candidate Donald Trump. Jacob said he has no doubt that Lance’s support of Trump was to blame for the incidents.

“When your national message is to teach America to hate again, you know it’s definitely going to inspire those and trickle down nationally,” Jacob said.

The Lance campaign released a statement in response to the claims.

“The display of anti-Semitic hate symbols like the swastika is abhorrent,” the statement said. “Leonard Lance stands with Peter Jacob in condemning these offensive acts of vandalism and supports a full police investigation into these crimes.”

Additionally, the statement said Lance has requested to attend a news conference at Jacob’s home on Tuesday and has asked to speak to Jacob personally about the incidents “in an effort to show bipartisan unity against racism.”