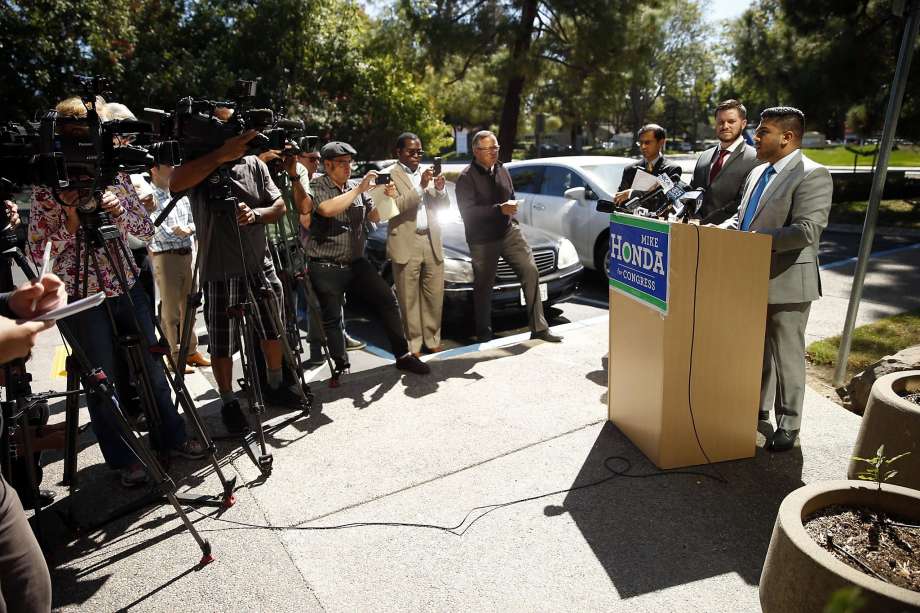 Brian Parvizshahi, Khanna’s campaign manager, resigned early Thursday evening, “at his own request,” said Hari Sevugan, a campaign spokesman. “Brian will not let Mike Honda use him to distract voters from the need for real change.”

A pair of legal actions filed in San Jose federal court alleges Khanna and Parvizshahi violated the federal Computer Fraud and Abuse Act and the federal Economic Espionage Act by taking the confidential information and using it in the campaign to oust Honda from the seat he has held since 2000.

The two men “conspired to intentionally access Mike Honda for Congress’ confidential, proprietary information” that contained “trade secret data regarding past, current and potential donors,” a statement from the Honda lawsuit read.

“We haven’t had a chance to evaluate the Honda campaign’s complaint and haven’t even been served,” Sevugan said. “The fact that Mike Honda went to the press before serving us tells you what this is really about — politics. Down in the polls six weeks before an election, it’s clear Mike Honda will do and say anything to hold on to his seat, including suing anyone who is on track to defeat him.”

The suit could serve as an extreme nuisance for the Khanna camp. Earlier this year, Chris Correa, the former scouting director of the MLB’s St. Louis Cardinals, was sentenced to 46 months in federal prison under the computer fraud law for hacking into the Houston Astros’ scouting records.

Criminal charges aren’t the immediate aim of the legal measures, which seek a preliminary injunction against the Khanna campaign calling for the immediate return of the campaign finance data and barring any use of Honda’s files.

The files Honda alleges have been broached contain scores of priceless information, for any politician.

Just one file contained detailed information on 9,793 people who gave to Honda between 2008 and 2014, including their names, addresses, email addresses and phone numbers along with their occupation, employer, and date and amount of all donations.

Gautum Dutta, attorney for the Honda campaign, said: “This is very serious. You’re not supposed to engage in a cyberattack of your political opponent.”

Parvizshahi remains the central character throughout the suit. According to court documents, Parvizshahi was hired in May 2012 as an intern for the Arum Group, a Democratic consultant that at the time handled fundraising for Honda. Parvizshahi was required to sign a confidentiality agreement before he was given access to client information, including what a company official described as “private, highly sensitive contact and donation information about (Honda’s) donors.”

When Parvizshashi quit a month later, he kept his access to the password-protected digital Dropbox file containing Honda’s records.

Computer records show that after he was hired in January 2014 as data director for the Khanna campaign, “Defendant Parvizshasi continually accessed the Honda files,” going into them 44 times before his connection was hurriedly removed after the unauthorized incursions were discovered last May, according to court documents.

“We’ve got Brian’s digital fingerprints on those files,” Beckendorf said.

The first warning of something having gone awry came in October, when a multitude of Honda’s supporters had called him to notify him that they had received email messages from Khanna asking to chat “about the race and about my policy ideas.” They also included links to unfavorable news stories about Honda.

Khanna’s messages were polite. When one Honda supporter slammed him for running against the congressman, Khanna replied: “I respect your support of Mike Honda. I just honestly believe this district needs a new beginning.”

Honda’s team denied suggestions from the Khanna campaign that there were political reasons for waiting until September to file the suits.

“These charges are ones we don’t take lightly — they took time to assess,” Dutta said.

Those complaints were just “the tip of the iceberg,” Beckendorf said, who estimated that for every person who called the Honda campaign to complain, another 50 to 100 received the messages, but didn’t call. “We knew we definitely had an invasion of privacy we had to address,” he said. “We knew (the email addresses) had to have been obtained illegally, but for a while it was an unsolved mystery.”

Concerns grew even graver in December, when San Jose Inside published online a list of Honda’s “1,000 Cranes,” donors who gave $1,000 and purportedly got special access and treatment from the congressman and his staff.

The newspaper reported on Dec. 16, 2015, that the list arrived “in an anonymous envelope.” It included the names, nicknames, employer information and personal phone numbers of 281 people who gave at least $1,000 to Honda’s re-election campaigns in 2010 and 2012.

A document reportedly downloaded by Parvizshahi was an exact match to the one posted by San Jose Inside, Beckendorf said. “We knew within moments that the files had been accessed and who had done it,” he added.

MALABAR ISLANDS, India (Diya TV) — Maritime forces from the U.S., India, Japan and Australia completed Phase II of the exercises dubbed Malabar in the Arabian Sea. The U.S. State Department thanked India in a tweet for hosting the effort by “The Quad” that promotes a free and open Indo-Pacific against a growing Chinese presence in the region.

The state of Michigan officially certified its election, formally granting President-Elect Biden its 16 electoral votes. And while President Trump continues to litigate in the hopes of overturning the outcome of the election, to date, he’s lost more than 30 cases. And now the General Services Administration informed the President-Elect he will be able to get the funding and documents needed  to start the formal transition in government.

Indian American Mala Adiga was appointed by President-Elect Joe Biden to be the Policy Director for his wife Jill, who will be the First Lady. Adiga is an alum of the Obama administration, as well as the Biden Foundation.

JAMMU and KASHMIR, India (Diya TV) — Indian Prime Minister Modi thanked security forces for unraveling a terrorist plot by Pakistan-based Jaish-e-Mohammad. Four men suspected of plotting a new attack on the anniversary of the 26/11 attacks were killed during a gunfight with Indian armed forces at a checkpoint in Jammu. Their truck was loaded with a cache of weapons and explosives. Modi is now reviewing the security apparatus along the international border and the Line of Control with Pakistan amid this infiltration.

Donald Trump Jr., President Trump’s eldest son, tested positive for coronavirus. His father and his girlfriend Kimberly Guilfoyle and many others in the Trump inner circle have had the virus over the last few months. A spokesman said Trump Jr. learned his diagnosis earlier this week, but has no symptoms and is quarantining in his cabin.

WASHINGTON (Diya TV) — China as it relates to the U.S. and India was a central topic of conversation at the USIBC Post-Election Perspectives virtual conference. Democratic Senator Mark Warner, Republican Senator John Cornyn in conversation with former U.S. Ambassador to India Richard Verma both conveyed how India’s importance to the U.S. is increasing in terms of security and economic opportunity moving forward. Both Senators were confident bilateral ties between the world’s two largest democracies would continue to strengthen under a Biden administration. Cornyn and Warner are co-chairs of the Senate India Caucus.

Elections officials in Georgia called the presidential race for President-elect Joe Biden after a hand recount recertified the results. The vote discrepancy totaled in the hundreds and not thousands needed for President Trump to change the outcome. Biden will be awarded the state’s 16 electoral votes. The Trump campaign continues to dispute the outcome and says they will continue to pursue all legal options.