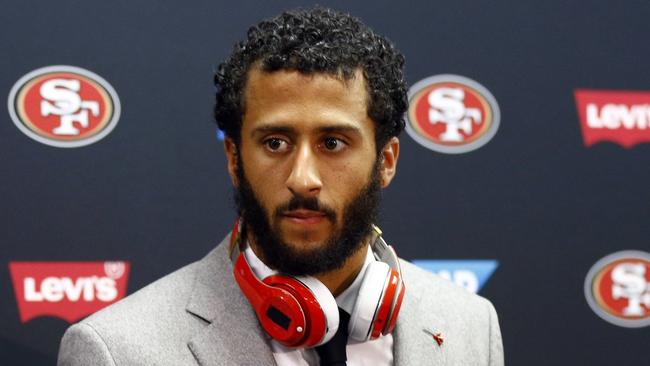 “Well I have followed it, and I think it’s personally not a good thing. I think it’s a terrible thing,” Trump told Seattle radio station KIRO 93.7-FM.

“Maybe he should find a country that works better for him. Let him try. It won’t happen.”

The embattled 28-year-old former Super Bowl starting quarterback has opted to sit during the playing of the National Anthem at his NFL football games, and he plans to continue doing so to bring attention to racial injustice and other social concerns. While explaining why he’s been sitting for the entirety of preseason to media members Sunday, Kaepernick turned his attention to the U.S. presidential race.

“The two presidential candidates that we currently have also represent the issue that we have in this country right now,” Kaepernick said.

“I mean, you have Hillary (Clinton) who has called black teens, or black kids `super predators.’ You have Donald Trump, who is openly racist,” Kaepernick said.

On his political rant, Kaepernick also found time to share his thoughts and comments about police brutality and rallied against a “six-month” training period before police can carry guns.

“We would like to cordially invite you to the Alameda County Regional Training Center (RTC) in Dublin, CA. The RTC is currently in session hosting our 156th and 157th basic police academies. In addition to the academy, we train thousands of law enforcement officers from throughout the state and country in all aspects of our profession, including use of force. We have a specially designed Use of Force simulator that puts officers in situations where they must make split second decisions on what actions to take. In addition, we invite you to meet with our current academies and veteran officers to talk to them about their experiences and yours.”

We hope that you will take this opportunity to meet with a new generation of law enforcement officers and have an open dialogue.

The Deputies of the Alameda County Sheriff’s Office

Kaepernick’s refusal has been the hot topic of discussion in the football world since Friday, over the weekend, some of his old colleagues chimed in with their opinions of his protest.

Alex Boone, now a member of the Minnesota Vikings, played alongside Kaepernick for five seasons with the Red and Gold. Boone, whose brother served in the military, was not amused with what he saw. However, he said it didn’t surprise him, during a postgame interview after the Vikings’ preseason contest against the San Diego Chargers.

“It’s hard for me, because my brother was a Marine, and he lost a lot of friends over there,” Boone said while wearing a shirt bearing the name of Chris Kyle, the late Navy Seal who was portrayed in the film American Sniper. “That flag obviously gives (Kaepernick) the right to do whatever he wants. I understand it. At the same time, you should have some (expletive) respect for people who served, especially people that lost their life to protect our freedom.

“We’re out here playing a game, making millions of dollars. People are losing their life, and you don’t have the common courtesy to do that. That just drove me nuts.”

Former 49ers head coach Jim Harbaugh, who is widely regarded for the drafting and development of Kaepernick, himself said the protest disappointed him. However, in true Harbaugh fashion, his take wasn’t shared in the most plain of English.

“Voltaire so eloquently stated, ‘I may not agree with what you say, but I’ll defend it until death your right to say it,’” Harbaugh said. “That’s a principle that our country is founded on. I don’t think you cannot deny someone the right to speak out or mock or make fun or belittle anybody else’s opinion.”

I apologize for misspeaking my true sentiments. To clarify, I support Colin's motivation. It's his method of action that I take exception to