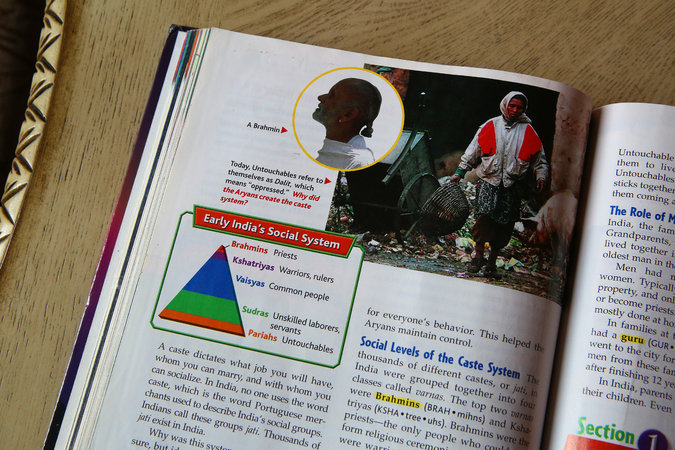 SACRAMENTO, Calif. (Diya TV) — The debate about the portrayal of “Hinduism” & “India” has garnered national attention from large news papers to network news, but understanding the debate is more than just realizing which version of history do you believe more. While there are many voices in this contentious debate, such as the Dalits who believe that eliminating mention of ‘Dalits’ or removing mentions of the ‘caste oppressions’ would erase the origins of their history. On the other hand there are Dalits who disagree and also testified on that issue in front of the commission in March asking for more positive references to ‘Dalits’ such as the inclusion of ‘Valmiki’ & ‘Vyasa’.

Moving on and back to the #revisionist agenda of the @HinduAmerican in #california textbooks. #donteraseindia pic.twitter.com/2ts3Z4lIIy

The issue however is not about whether caste exists in Hinduism, because so far no one disagrees with that. The issue is also not so much about who is more accurate in terms of their representation of history. The core issue at hand that the commission must decide on, is does replacing “India” by “South Asia” follow the same standards that the commission has held in the past when dealing with historical representations of other countries and religions in the same context.

The latest news to develop in the California Department of Education Instructional Quality Commission’s (IQC) plans to accept edits proposed by the South Asia Faculty Group(SAFG), in school curriculum that in effect would largely remove references to India and Hinduism in textbooks has been met with further objection. This time, by a group of scholars & academics who refer to themselves as the Social Sciences and Religion Faculty Group(SSRFG).

The proposed changes, if accepted by the IQC would appear in sixth-to-seventh grade textbooks, and begin as early as next year. Many believe implementing those changes would further alienate Indian youth from the history of their native country.The South Asia Faculty group submitted a set of edits that would eliminate mention of “India” and replace it with “South Asia.” They additionally proposed removing “Hinduism” and replacing it with the term, “Ancient Indian Religion.” In their submissions to the Department of Education, they call the groups opposing their edits ‘as espousing Hindu nationalist views’.

In their cover letter to the IQC, the South Asia Faculty group state

We write to submit extended corrections to the current draft curriculum framework; these edits supersede those we submitted on November 18, 2015 (the rest of the report stands). We are aware of objections to our report by groups espousing Hindu nationalist views.

Advocacy groups such as the Hindu American Foundation that have worked with the Department of Education for years to bring about change in California Textbooks regarding the portrayal of Hinduism, take objection to being called ‘Hindu nationalists’. They believe as Indian Americans, and as Hindu Americans they should be afforded the same rights in this process as have been afforded to other religious groups such as the Christian Americans, the Jewish Americans and the Muslim Americans. While they do not believe in “cleansing” history, they say all they are asking for is equitable treatment and the same level of standards to be applied to Hinduism as have been applied to other religions. Most religions within the 6th & 7th grade History and Social Sciences framework currently are portrayed in fairly positive light while drawing some attention to the negative aspects. However, currently the portrayal of Hinduism is entirely about ‘Caste’ and other negative aspects of the religion and there is little to no mention of the positive aspects such as ‘Yoga’ or ‘Meditation’

In addition, the edits suggested by the South Asia Faculty group according to the Social Sciences and Religion Faculty Group, are inequitable for many reasons.

For example, in their edits the South Asia Faculty Group suggests,

[quote style=’1′ cite=” title=”]We recommend that “the religion of Ancient India” be used throughout the framework for the 6th grade curriculum, rather than “Hinduism or “the religion of India.” Gods,” “goddesses,” and “deities” should be in lower case throughout, and Brahmin, the name of a group of people, should be capitalized throughout. We wish to clarify that while “Ancient India” is the accepted usage among Indologists, in other fields, pre-modern South Asia is the common term of reference. Since there is no standardized usage across fields, it is difficult for us to recommend a single standard term for use in the curriculum framework. After careful review, we have settled on a context dependent approach for the use of the terms, “Ancient India,’ ‘India,’ ‘Indian subcontinent’ and ‘South Asia,’ as we explain in the edits. The use of terms like “Ancient India” and “India” in the current version of the draft framework, particularly for grades 6 and 7 is at times misleading. Although “Ancient India” is common in the source material, when discussing the Indus Valley Civilization (IVC), we believe it will cause less confusion to students to refer to the “Early Civilization of South Asia or “Ancient South Asia” because much of the Indus Valley is now in modern Pakistan. Conflating “Ancient India” with the modern nation-state of India deprives students from learning about the shared civilizational heritage of India and Pakistan. – South Asia Faculty Group[/quote]

The Hindu American Foundation & the Uberoi Foundation for Religious studies submitted a rebuttal of its own, backed with the research and statements by academics of equally robust credentials and experience. While they agreed with a few of the edits suggested, they found it troubling that the Group wanted to eliminate mention of India, almost entirely. The hearing in March was a disappointing time for these groups.  The IQC was supposed to hold a hearing on May 11th to decide on these edits and it has now been postponed to May 19th.

On May 5th a new group of scholars, the Social Sciences and Religion Faculty Group (SSRFG) submitted their edits entreating the commission to take a more balanced and equitable approach

[quote style=’1′ cite=” title=”]We submit this letter to express concerns regarding certain edits to the 6th and 7th grade History­ Social Science Framework. The California Department of Education’s Instructional Quality Commission (IQC) History Social Science Subject Matter Committee (HSS­SMC), with the intention to be balanced, has ill­ advisedly accepted edits that do not serve that goal. Those edits also do not “instill in each child a sense of pride in his or her heritage” or “enable all students to become aware and accepting of religious diversity while being allowed to remain secure in any religious beliefs they may already have,” as required by the Standards for Evaluating Instruction Materials for Social Content (2013), pages 5 and 10, and by California law.[/quote]

These are rights that are guaranteed by the Standards for Evaluating Instruction Materials for Social Content, and protected by California law, the group writes in its letter to the state board of education.

In their letter, the SSRFG also argues that the term “South Asia” is a post World War II geopolitical designation which references the breakup of British India. The signees of the letter adopt a narrative which opines the proposed changes are discriminatory — the changes “refer to all other ancient geographical areas by their ancestral terms China, Japan, Egypt, Greece, only India is recommended for a change,” the group writes in their letter.

First,the legally mandated Content Standards use “India,” and such a major change needs to be considered when the Content Standards are revised and a proper discussion can be conducted. Second,the recommendation to use “South Asia” is not historical. Geographic and political terms based on events that took place since the mid­-twentieth century are anachronistic, that is, they belong to a period other than that being portrayed. The term “South Asia” is a post­ WWII geopolitical designation to account for the breakup of British India into India, Pakistan, Bangladesh, Afghanistan, Nepal, Myanmar, Sri Lanka, and the Maldives. However, the time period referred to in the Framework narrative predates that period by millennia. Third, from ancient times, as noted in historical records, foreigners and Indians alike have perceived of the entire Indian subcontinent as one geographical unit. Fourth, the Framework narrative refers to all other ancient geographical areas by their ancestral terms ­­ China, Japan, Egypt, Greece, etc. Only “India” is recommended for a change [/quote] 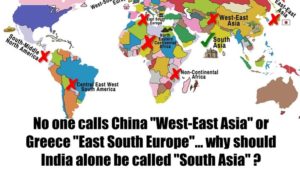 The SSRFG concludes its recommendations to the board of education by saying the proposed changes by the South Asian Faculty Group do nothing but “create unnecessary obstacles for a more constructive understanding of the Indian subcontinent and the world’s third largest religion.”

Furthermore, the group is calling for an equal representation of India and Hinduism in textbooks that is consistent with the manner in which other cultures and religions are portrayed, specifically, ones which avoid “Eurocentric biases.”

Diya TV team has been covering this debate extensively, to know more you can read the previous articles here.