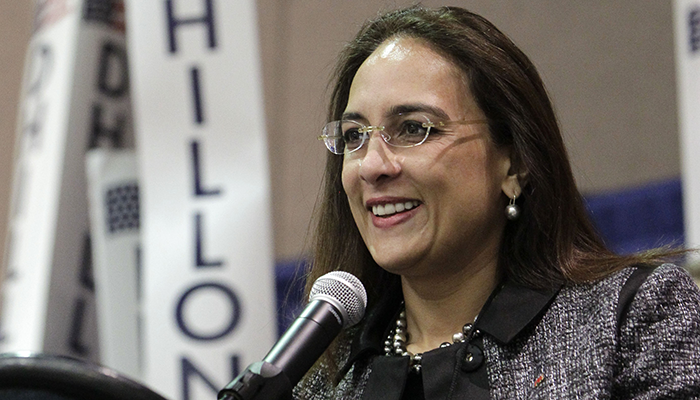 SAN FRANCISCO (Diya TV) — Harmeet Dhillon won her bid to become a Republican National Committeewoman from California during last weekend’s state GOP convention, becoming the first Indian American to do so in the party’s history.

The feat equals the second such milestone Dhillon has accomplished — she was also the first woman to be elected as the party’s vice chair, where she is currently serving in her third year. With her election into the role, she will be charged with representing the California Republican Party during July’s national convention.

While her campaign for committeewoman was unopposed, she did receive the endorsement of nearly every major member of the party within the state.

Before her election took place, Dhillon discussed some of the changes she would seek to propose at the national convention during an exclusive interview with Diya TV.

Dhillon also discussed which GOP candidate has been the most popular in the Indian-American community.

“I have heard a lot of support from the Indian community for Donald Trump, believe it or not,” said Dhillon. “He seems to be very popular amongst Indian-American first-generation immigrants. I think when a lot of them came to this country they wanted to become millionaires and they wanted to be real estate barons and (they see him and think) ‘look, that guy did it,’ so there’s a lot of admiration for his business acumen and his success story.”

While Dhillon agrees that rhetoric from the candidates can have a negative impact on minorities getting involved in the GOP movement, she doesn’t necessarily think it will trump the amount of animosity and tiredness voters have for the way things have transpired during the eight years under the Obama administration.

On the hotbed topic of immigration, Dhillon opined that all party members, and most in the general population, have a problem with the policies that are in place surrounding illegal immigration.The issue isn’t stopping immigration, it’s about finding the right solutions to bring a halt to the scores of people who enter the country illegally, she said.

“I for one am strongly in favor of shutting down illegal immigration in this country and getting a handle on the law enforcement aspects of it,” said Dhillon.

For those who have pegged Trump as a racist, Dhillon disagrees. “I have not seen any evidence of him (Trump) being a racist, or preferential to one (race) or the other,” she said. “But I think it’s very legitimate to say that you’re opposed to illegal immigration.”

Wall Street is clearly betting that Trump’s plans to slash taxes, ramp up infrastructure spending and cut regulation will make the American economy grow faster. If that happens, without any disruptions to global trade, it could propel corporate profits, the lifeblood of stock prices. However, the jump in stocks is also a reflection of the solid economy Trump inherited from former President Obama. No wonder there has been an increase in the number of people who have invested in the stock market. Although, some of them may have been persuaded to do so after reading these Stash reviews and learning all they need to know about the market. Of course, the economy has had something to do with this too. The U.S. has added jobs for a record 75 straight months and the country’s unemployment rate is sitting near a 10-year low.