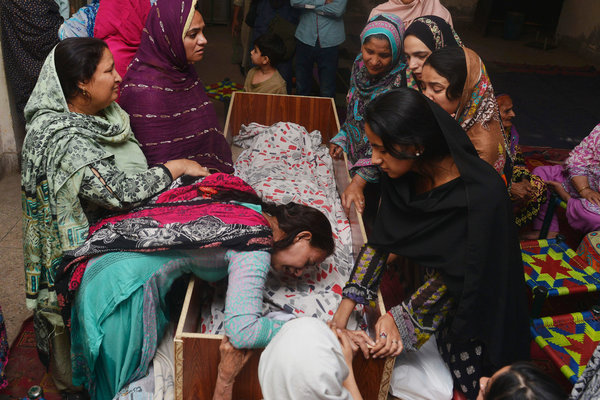 ISLAMABAD, Pakistan (Diya TV) — A suicide bomber set off an explosion near a children’s park on Easter Sunday in the eastern city of Lahore, killing at least 69 people and injuring another 300, rescue workers and officials said. The powerful blast was the third bombing in Pakistan in the last month alone, a reminder that even as the military has begun a fierce crackdown on extremists over the past two years, Islamist groups remain a serious threat.

Global heads of state, leaders and prominent personalities joined in the fight against terror on Sunday evening and Monday morning, extending their thoughts and prayers to the South Asian nation.

Heard about the blast in Lahore. I strongly condemn it. My condolences to families of the deceased & prayers with the injured: PM

Translation: “Following the attack in Lahore, Pakistan, I express to the people of Pakistan the solidarity of France in these painful moments.”

I'm shocked by the terrorist attack in Lahore. My thoughts are with the families and friends of the victims. We will do what we can to help.

Translation: “Indonesia strongly condemns the bomb attack in Lahore. Terror in any name cannot be justified. Deep condolences to the victims and people of Pakistan.”

Canada condemns the deplorable bombing in Lahore, Pakistan. Our thoughts and prayers are with all those killed or injured. #LahoreBlast

The evil that is radical Islamism struck in Pakistan today in a shocking display of savagery: https://t.co/IDjIGTVo8F

"Let us remember the victims … as we gather strength and resolve to defeat all who threaten our values." pic.twitter.com/vGOoWzQfLH

We are grieving today for the families affected by the deplorable attack in Lahore. No one should ever fear taking their children to a park.

Another radical Islamic attack, this time in Pakistan, targeting Christian women & children. At least 67 dead,400 injured. I alone can solve

My prayers are with the victims of the horrific Easter Day attack in Lahore. Pakistan and all nations must confront & defeat terrorists. -H

Notable voices from around the region, like Indian tennis star Sania Mirza and Nobel Peace Prize–winning education activist Malala Yousafzai. Mirza, who is married to Pakistani cricketer Shoaib Malik, opined the attack was “disgusting,” while Yousafzai said she was “devastated by the senseless killing of innocent people.”

What kind of a sick world are we living in ? Disgusting .. Heart and prayers go out for Lahore.. Ya Allah rehem ?

Seemingly the perfect scenario to test out its ‘Safety Check’ feature, Facebook activated the program for the eighth time this year. However, a bug caused many subscribers several thousand miles away from the bombing to mistakenly ask whether or not they were safe. Subscribers in New York, London, Washington D.C. and throughout the Bay Area received the alert, and took to social media, expressing their confusion, annoyance and in some cases, alarm, after erroneously receiving ‘Safety Check’ texts or notifications.

Some of the push notifications referenced an explosion without stating its location, leading some to worry an explosion had taken place near them that they weren’t aware of.

this really freaked me out until I realized that Facebook thought I was in Pakistan pic.twitter.com/3w6iHCsIaC

In a statement, Facebook said “many users” were affected by the bug but did not release an official number. The company said it “worked quickly to resolve the issue” and apologized to any users who unintentionally received the alert. “We activated Safety Check today in Lahore, Pakistan, after an explosion that took place there,” Facebook said in a post. ”Unfortunately, many people not affected by the crisis received a notification asking if they were okay. This kind of bug is counter to our intent.”

Facebook first launched ‘Safety Check’ in October 2014 to enable users to quickly tell their friends they were safe after a disaster such as an earthquake or flood. The company has since added a feature to include violent attacks to the tool, for the first time after the terrorist attacks in Paris in November and after the attacks in Brussels last week. It allows Facebook users to mark on their profile that they are safe as well as tag other users who might be safe with them.

Why US Attorney Preet Bharara is a hero in Turkey