CHICAGO, (Diya TV) – CBS News president David Rhodes is standing by the side of one of his journalists, Sopan Deb, who was arrested outside the Donald Trump rally which was cancelled on Friday evening amid violence between protesters and supporters. Sopan was arrested and detained while covering the protests.

Rhodes tweeted that Deb, who was covering the rally at the University of Illinois’ Chicago campus, had been handcuffed and was charged with resisting arrest. As Rhodes is not a Chicago native, he may opt to use a criminal defense lawyer in Colorado Springs when preparing for his legal case.

“On tape you see he did not resist, identified himself as working press,” Rhodes said in his tweet.

.@SopanDeb was handcuffed, later charged with resisting arrest; on tape you see he did not resist, identified himself as working press

Deb, who has covered the Republican presidential front-runner’s campaign since last summer, was filming a man whose face was bloody and lying on the ground near police at the time of his arrest, according to a “CBS This Morning” report Saturday. CBS News also aired footage of the rally and Deb’s arrest, which he managed to catch on tape. “Deb continued to roll as police kept watch,” the CBS report noted. “Without warning, Deb was grabbed from behind and thrown to the ground.”

A police officer placed his boot on Deb’s neck in an effort to keep him pinned to the ground, according to the network’s accompanying report. 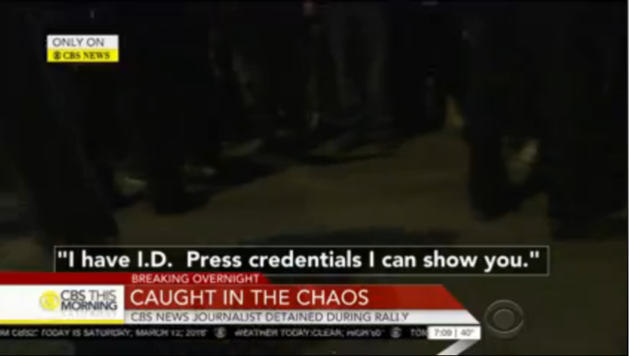 Sopan Deb was arrested despite identifying as a member of the media. CBS News

As mentioned previously, Deb has been following Trump’s campaign since last summer, however, Friday evening what he saw left him at a loss for words. The scene was an entirely unprecedented experience since his journalism career began, according to his last tweet.

I've never seen anything like what I'm witnessing in my life.

Several reporters have shared stories of increasing difficulties in doing their jobs – Trump’s campaign has severely restricted the movements of the press, and has suppressed what they are allowed to report. On multiple occasions, rally organizers have confined working media at his event inside of a “press pen,” which has often times made them the target of Trump’s supporters, and in some instances, the candidate himself.

In January, Deb described how one Trump supporter accused him of being a member of ISIS.

This isn't first time this has happened. At last month's rally in Vegas, man came up to me to say "Go back to Iraq!" I've never been!

And last month, in vintage WWE fashion, a Secret Service agent choke-slammed Time Magazine photographer Chris Morris after he exited the press pen to cover a Black Lives Matter protest. At Friday’s event in Chicago, Breitbart News reporter Michelle Fields filed a police report against Trump campaign manager Corey Lewandowski, alleging she was assaulted after the candidate’s press conference on Tuesday evening. Despite an eyewitness account, and a video recording, the campaign has dismissed the accusations.