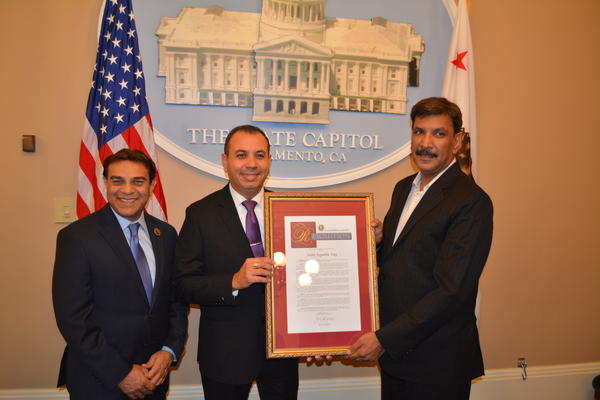 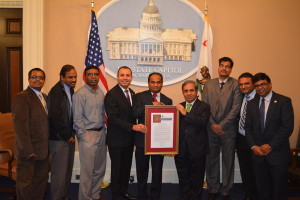 SACRAMENTO, Calif. — Joined by the Republic of India Consul General and several Asian Indian American dignitaries from throughout the state, California state Senator Tony Mendoza (D-Artesia) stood before the floor of the legislature to present a Senate Concurrent Resolution, declaring Jan. 26 as “Indian Republic Day” in the state of California.

It becomes just the second time in California’s 166 year history that such a resolution has been adopted.

“Today, the California Legislature joins the people of India and Asian Indians throughout the world to celebrate Republic Day and pay tribute to India’s constitution, its thriving democracy and vitality,” Sen. Mendoza said. “It is important to recognize the significance of this day as well as the contributions of the Asian Indian American community to the diverse fabric of California.”

The resolution pays homage to the history of Republic Day—a day in which Indian Nationalists unfurled a new flag in December of 1929, opining that every January 26 in Indian would be forever celebrated as Republic Day. Eighteen years later, in 1947, India achieved its independence, and declared their allegiance to a new constitution, which went into effect in January, 1950. 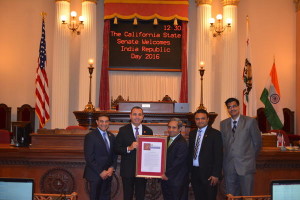 Sen. Mendoza meets with delegates on the House floor to celebrate Republic Day 2016

In the present day, Republic Day remains to serve as the most popular of Indian national holidays—to remind the world that the foundation of any nation is in its people, and their spirit and courage to sacrifice in the pursuit of freedom and liberty. While India serves as the world’s largest democracy with an estimated 1.2 billion people, and the globe’s third-largest economy, the connection to the Golden State is direct—in 2013, the United States exported more than $21.8 billion in goods to India, of which California was the largest single state contributing more than $5.26 billion to this total.

Mendoza’s intention is education, not a far cry from where he made his career, serving for over a decade as an elementary school teacher in the state’s notorious East Los Angeles neighborhoods. His desire is that the resolution will serve to educate others about these events, and reflect on the endless achievements of the Indian community in the state. More than a half-million Indian Americans reside in California, and have been major proponents in the growth of the state’s food, medicine, business and technology sectors.

“I thank the Indian Consul General and the Asian Indian American community of California for sharing the joy of this wonderful day with us, for reminding us of its significance, and for their dedication to core community values of family, service, knowledge and peace,” Mendoza said.

“We thank the California State Senate and Senator Tony Mendoza for joining in celebrating the 67th Republic Day of India. We are confident that the already strong ties in technology, trade, culture and education, as well as people-to-people contacts, will be further enriched and enhanced in the future,” said Republic of India Consul General, Ambassador Venkatesan Ashok.